Blame the Fed or Bond Bubble Anyone? 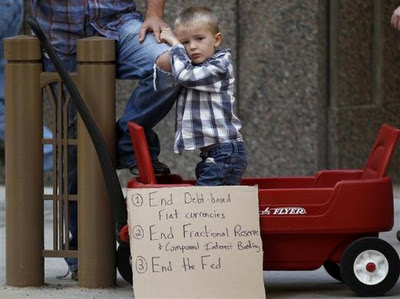 Studying Austrian economics may help you understand the distortions occurring in the economy. Think of the difficulty you, as an investor, face when normalizing earnings in this environment.

Blame the Fed for the Financial Crisis in today’s Wall Street Journal points
out the Fed’s devastating distortions in the economy. Bond Bubble Anyone?

To know what is wrong with the Federal Reserve, one must first understand the nature of money. Money is like any other good in our economy that emerges from the market to satisfy the needs and wants of consumers. Its particular usefulness is that it helps facilitate indirect exchange, making it easier for us to buy and sell goods because there is a common way of measuring their value. Money is not a government phenomenon, and it need not and should not be managed by government. When central banks like the Fed manage money they are engaging in price-fixing, which leads not to prosperity but to disaster.

The Federal Reserve has caused every single boom and bust that has occurred in this country since the bank’s creation in 1913. It pumps new money into the financial system to lower interest rates and spur the economy. Adding new money increases the supply of money, making the price of money over time—the interest rate—lower than the market would make it. These lower interest rates affect the allocation of resources, causing capital to be malinvested throughout the economy. So certain projects and ventures that appear profitable when funded at artificially low interest rates are not in fact the best use of those resources.

Eventually, the economic boom created by the Fed’s actions is found to be unsustainable, and the bust ensues as this malinvested capital manifests itself in a surplus of capital goods, inventory overhangs, etc. Until these misdirected resources are put to a more productive use—the uses the free market actually desires—the economy stagnates.

The great contribution of the Austrian school of economics to economic theory was in its description of this business cycle: the process of booms and busts, and their origins in monetary intervention by
the government in cooperation with the banking system. Yet policy makers at the
Federal Reserve still fail to understand the causes of our most recent
financial crisis. So they find themselves unable to come up with an adequate
solution.

In many respects the governors of the Federal Reserve System and the members of the Federal Open Market Committee are like all other high-ranking powerful officials. Because they make decisions that profoundly affect the workings of the economy and because they have hundreds of bright economists working for them doing research and collecting data, they buy into the pretense of knowledge—the illusion that because they have all these resources at their fingertips they therefore have the ability to guide the economy as they see fit.

Nothing could be further from the truth. No attitude could be more destructive. What the Austrian economists Ludwig von Mises and Friedrich von Hayek victoriously asserted in the socialist calculation debate of the 1920s and 1930s—the notion that the marketplace, where people freely decide what they need and want to pay for, is the only effective way to allocate resources—may be obvious to many ordinary Americans. But it has not influenced government leaders today, who do not seem to see the importance of prices to the functioning of a market economy.

The manner of thinking of the Federal Reserve now is no different than that of the former Soviet Union, which employed hundreds of thousands of people to perform research and provide calculations in an attempt to mimic the price system of the West’s (relatively) free markets. Despite the obvious lesson to be drawn from the Soviet collapse, the U.S. still has not fully absorbed it.

The Fed fails to grasp that an interest rate is a price—the price of time—and that attempting to manipulate that price is as destructive as any other government price control. It fails to see that the price of housing was artificially inflated through the Fed’s monetary pumping
during the early 2000s, and that the only way to restore soundness to the
housing sector is to allow prices to return to sustainable market levels.
Instead, the Fed’s actions have had one aim—to keep prices elevated at bubble
levels—thus ensuring that bad debt remains on the books and failing firms
remain in business, albatrosses around the market’s neck.

The Fed’s quantitative easing programs increased the national debt by trillions of dollars. The debt is now so large that if the central bank begins to move away from its zero interest-rate policy, the rise in interest rates will result in the U.S. government having to pay hundreds of billions of dollars in additional interest on the national debt each year. Thus there is significant political pressure being placed on the Fed to keep interest rates low. The Fed has painted itself so far into a corner now that even if it wanted to raise interest rates, as a practical matter it might not be able to do so. But it will do something, we know, because the pressure to “just do something” often outweighs all other considerations.

What exactly the Fed will do is anyone’s guess, and it is no surprise that markets continue to founder as anticipation mounts. If the Fed would stop intervening and distorting the market, and would allow the functioning of a truly free market that deals with profit and loss, our economy could recover. The continued existence of an organization that can create trillions of dollars out of thin air to purchase financial assets and prop up a fundamentally insolvent banking system is a black mark on an economy that professes to be free.

For further detail Of the Austrian Business
Cycle Theory

An artificial boom is an instance in which the change in the interest-rate signal
and the change in resource availabilities are at odds with one another. If the
central bank pads the supply of loanable funds with newly created money, the
interest rate is lowered just as it is with an increase in saving. But in the
absence of an actual change in time preferences, no additional resources for
sustaining the policy-induced boom are freed up. In fact, facing a lower
interest rate, people will save less and spend more on current consumables. The
central bank’s credit expansion, then, results in an incompatible mix of market
forces.

Increased investment in longer-term projects is consistent with the underlying economic realities in a genuine saving-induced boom but not in a policy-induced artificial boom. The artificial boom is characterized by “malinvestment and overconsumption.”

The type of boom-and-bust cycle caused by cheap credit and overinvestment was reflected in the recent housing bubble as well as the dot-com bubble just over a decade ago. As former Fed chairman Alan Greenspan cut interest rates (to deal with his previous bubbles) he provided the credit and incentive to invest in such ventures as housing and Internet start-ups. Once these investments were not as profitable as they were originally, the bust begins.

Timing is uncertain, but look at the charts below: Government Bonds have the potential for much pain with little gain. Real interest rates are negative! Fear, manipulation by the Federal Reserve, and investors’ conditioned response to a 30-year bull market in bonds may be some of the reasons bonds do not adequately reflect their true risk. 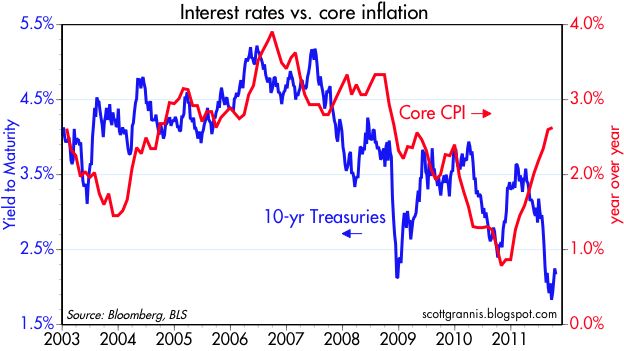 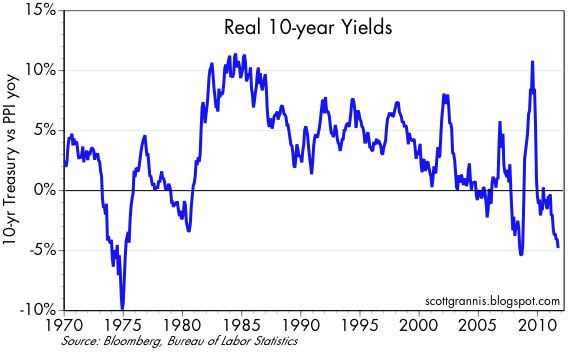 This entry was posted in Economics & Politics and tagged Bubbles, Federal Reserve. Bookmark the permalink.