Buffett in his Early Years 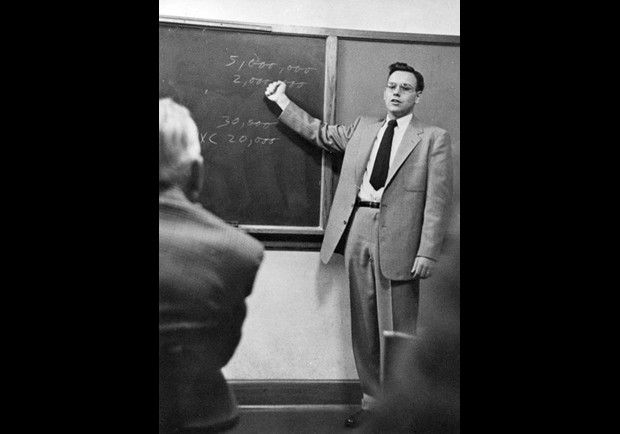 How Buffett Got Started

A great story by Buffett in the latest issue of ForbesLife about how he got started (with some wonderful old pictures of him and his family from the 1950s):

This article, by Warren Buffett, as told to Randall Lane, appears in the upcoming April issue of ForbesLife magazine, as part of its “When I Was 25″ series. By Warren Buffett

Benjamin Graham had been my idol ever since I read his book The Intelligent Investor. I had wanted to go to Columbia Business School because he was a professor there, and after I got out of Columbia, returned to Omaha, and started selling securities, I didn’t forget about him. Between 1951 and 1954, I made a pest of myself, sending him frequent securities ideas. Then I got a letter back: “Next time you’re in New York, come and see me.”

So there I went, and he offered me a job at Graham-Newman Corp., which he ran with Jerry Newman. Everyone says that A.W. Jones started the hedge fund industry, but Graham-Newman’s sister partnership, Newman and Graham, was actually an earlier fund. I moved to White Plains, New York, with my wife, Susie, who was four months pregnant, and my daughter. Every morning, I got on a train to Grand Central and went to work.

It was a short-lived position: The next year, when I was 25, Mr. Graham—that’s what I called him then—gave me a heads-up that he was going to retire. Actually, he did more than that: He offered me the chance to replace him, with Jerry’s son Mickey as the new senior partner and me as the new junior partner. It was a very tiny fund—$6 million or $7 million—but it was a famous fund.

This was a traumatic decision. Here was my chance to step into the shoes of my hero—I even named my first son Howard Graham Buffett. (Howard was for my father.) But I also wanted to come back to Omaha. I probably went to work for a month thinking every morning that I would tell Mr. Graham I was going to leave. But it was hard to do.

My wife and kids went back to Omaha just ahead of me. I got in the car, and on my way west checked out companies I was interested in investing in. It was due diligence. I stopped in Hazleton, Pennsylvania, to visit the Jeddo-Highland Coal Company. I visited the Kalamazoo Stove & Furnace Company in Michigan, which was being liquidated. I went to see what the building looked like, what they had for sale. I went to Delaware, Ohio, to check out Greif Bros. Cooperage. (Who knows anything about cooperage anymore?) Its chairman met with me. I didn’t have appointments; I would just drop in. I found that people always talked to me. All these people helped me.

I had no plans to start a partnership, or even have a job. I had no worries as long as I could operate on my own. I certainly did not want to sell securities to other people again. But by pure accident, seven people, including a few of my relatives, said to me, “You used to sell stocks, and we want you to tell us what to do with our money.” I replied, “I’m not going to do that again, but I’ll form a partnership like Ben and Jerry had, and if you want to join me, you can.” My father-in-law, my college roommate, his mother, my aunt Alice, my sister, my brother-in-law, and my lawyer all signed on. I also had my hundred dollars. That was the beginning—totally accidental.

When I formed that partnership, we had dinner, the seven of them plus me—I’m 99 percent sure it was at the Omaha Club. I bought a ledger for 49 cents, and they brought their checks. Before I took their money, I gave them a half sheet of paper that I had made carbons of—something I called the ground rules. I said, “There are two or four pages of partnership legal documents. Don’t worry about that. I’ll tell you what’s in it, and you won’t get any surprises.

“But these ground rules are the philosophy. If you are in tune with me, then let’s go. If you aren’t, I understand. I’m not going to tell you what we own or anything like that. I want to get bouquets when I deserve bouquets, and I want to get soft fruit thrown at me when I deserve it. But I don’t want fruit thrown at me if I’m down 5 percent, and the market’s down 15 percent—I’m going to think I deserve a bouquet for that.” We made everything clear, and they gave me their checks.

I did no solicitation, but more checks began coming from people I didn’t know. Back in New York, Graham-Newman was being liquidated. There was a college president up in Vermont, Homer Dodge, who had been invested with Graham, and he asked, “Ben, what should I do with my money?” Ben said, “Well, there’s this kid who used to work for me.…” So Dodge drove out to Omaha, to this rented house I lived in. I was 25, looked about 17, and acted like 12. He said, “What are you doing?” I said, “Here’s what I’m doing with my family, and I’ll do it with you.”

Although I had no idea, age 25 was a turning point. I was changing my life, setting up something that would turn into a fairly good-size partnership called Berkshire Hathaway. I wasn’t scared. I was doing something I liked, and I’m still doing it.

This entry was posted in Investing Gurus and tagged Buffett, Graham. Bookmark the permalink.