The Caveman’s Battle for Free Speech 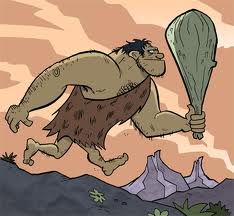 Steve Cooksey was a grotesque, obese, junk food scarfing lout who was a diabetic. He decided to go forward by leaping back in time to the days of our pre-historic Paleolithic anscestors and live like a caveman. He soon was eating only vegetables, meat and a few fruits. He exercised like a caveman–running barefoot, jumping and climbing. He went from flab to fab and he no longer took insulin or medication for his diabetes.  He was healthy again.

Soon he was sharing his lessons with friends. But regulators in North Carolina said he could not give advice without a dietician’s license to practice. Cease and desist!

Should the caveman have the rights to free speech or should the dinosaur-like regulators stifle the free exchange of thought?

Go here and click on the humourous video: http://mjperry.blogspot.com/2012/05/ijcaveman-blogger-fight-for-free-speech.html

“Can the government throw you in jail for offering advice on the Internet about what food people should buy at the grocery store?”

“That is exactly the claim made by the North Carolina Board of Dietetics/Nutrition. In December 2011, diabetic blogger Steve Cooksey started a Dear Abby-style advice column on his popular blog (www.diabetes-warrior.net) to answer reader questions. One month later, the State Board informed Steve that he could not give readers advice on diet, whether for free or for compensation, because doing so constituted the unlicensed, and thus criminal, practice of dietetics. The State Board also told Steve that his private emails and telephone calls with readers and friends were illegal, as was his paid life-coaching service. The State Board went through Steve’s writings with a red pen, indicating what he may and may not say without a government-issued license.”
“But the First Amendment does not allow the government to ban people from sharing ordinary advice about diet, or scrub the Internet—from blogs to Facebook to Twitter—of speech the government does not like. North Carolina can no more force Steve to become a licensed dietitian than it could require Dear Abby to become a licensed psychologist.”

The other side of the story

Everytime I read a case taken up by the Institute for Justice – my first reaction used to be – “Naah … cannot be true” – because it is so incredible. Today, my reaction is one of intense sadness – on what we have become as a nation – conceived in liberty and to allow people to pursue their happiness. The word “tyranny” is often abused – but fits.
Given the fact that most Americans now see little trouble with bureaucrats regulating how much water must flow through your shower head or limit the volume of water in your tank I doubt that the US is anywhere as free as the cheerleaders claim it to be.

Larry G,
Your link doesn’t prove that this is “trumped up propaganda”.  In fact, it shows just how insidiously creative government bureaucrats are at side stepping the constitution and stepping on the rights of citizens.
The whole purpose of licensing is to raise barriers to entry.  This particular license is also to silence any dissent from the government approved diet.  The best way to keep people from knowing the fraud that passes as nutritional advice from government is to silence those who disagree with it and are able to provide proof that the officially approved diet is at the heart of much the diet caused health problems in the country.