Whatever Happened to the “Peak Oil” Headlines? 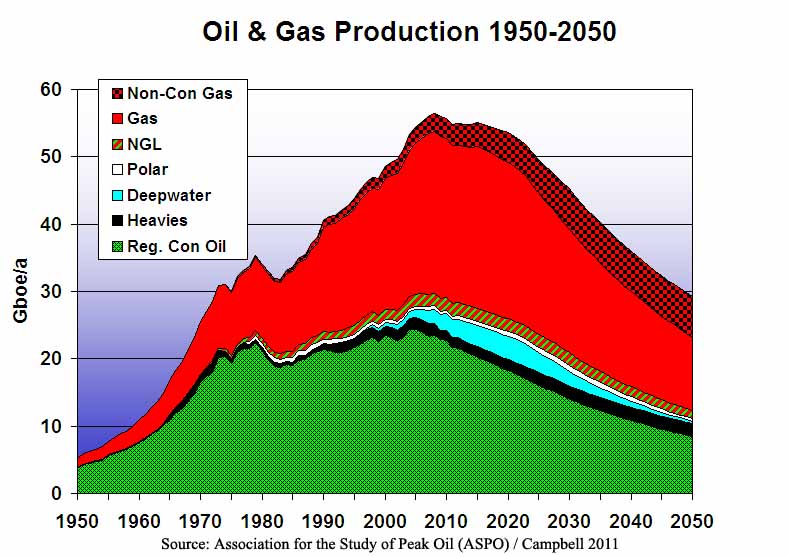 But we need to remember a few things.

First, whatever ends up replacing petroleum will come in its own good time, later than we’d like but probably sooner than we expect. It will come because it stores energy and power better than gasoline does and more cheaply to boot. It will come with some tremendous benefits and some unfortunate drawbacks. Consider as you lament the evils of crude oil: the fairly accidental discovery of kerosene and expansion of the refining process in the second half of the 19th century saved whales from an early mass extinction while at same time making nighttime light and winter heat affordable to even the most impoverished parts of Asia, Africa and Latin America. Gasoline itself was originally a waste product, largely unused until the invention of the internal combustion engine, and automobiles made for cleaner streets (no more manure) and safer farm equipment, given that farmers no longer had to wrestle with motors that had minds of their own. Kerosene itself languished as an unloved byproduct of refining for several decades until the invention of the jet engine.

Second, that new fuel will probably not come as the result of government-sponsored research. Government efforts to target new development – whether hydrogen fuel cells, hybrid engines, coal gasification, ethanol subsidies – may contribute some, but the kind of thinking and investing needed to find or make that new fuel probably cannot be done by government bureaucrats, scientists or regulators, who can only think incrementally and usually only consider efficiency and conservation, rather than entirely new ways of doing things.

I don’t necessarily trust technology, but I do trust human ingenuity. Civilization as we know it will grind to a halt without the energy we derive today from crude oil, and that’s in and of itself is motivation enough to make sure that future energy is widely available at prices people can afford.

Warnings from the recent past:

“A global peak is inevitable. The timing is uncertain, but the window is rapidly narrowing.” UK Energy Research Centre -2009

“The next five years will see us face the oil crunch.” UK Industry Taskforce on Peak Oil and Energy Security 2009

Natural gas is a diminishing resource as well and cannot satisfy the growing demand for energy. US Gas supplies were so low in 2003 after a harsh winter that to preserve life and property supplies were close to being cut off to manufacturers, electric plants and lastly homes.

As resource economist Julian Simon taught us years ago, we never have, and never will, run out of scarce resources like oil because as a resource becomes more scarce, its price will rise, which will set in motion a series of actions that will counteract the scarcity. For example, higher prices for oil will increase the incentives to: a) find more oil, b) conserve on the use of oil, and c) find more substitutes. And that’s exactly what’s happened recently in response to higher oil prices – domestic crude oil production reached a 14-year high in March, and the share of rigs drilling for oil (vs. natural gas) set a new record high of 70% last week.

From a blog: Peak Idiocy

Of all the idiotic things that people believe, the whole “peak oil” thing has to be right up there. It is literally impossible for us to run out of oil. We have never run out of anything, and we never will.

If we did start to use up the oil we have…(though, counting shale oil, we still haven’t used even 10% of the total KNOWN reserves on earth, and there are lots of places we haven’t looked)…but suppose we were on our way to using it up. Three things would happen.

1. Prices would rise, causing people to cut back on use. More fuel efficient cars, better insulation on houses, etc. Quantity demanded goes down.

2. Prices would rise, causing people to look for more. And they would find more oil, and more ways to get at it. Quantity supplied goes up.

3. Prices of oil would rise, making the search for substitutes more profitable. At that point (though not now!) alternative fuels and energy sources would be economical, and would not require gubmint subsidies, because they would pay for themselves. The supply curve for substitutes shifts downward and to the right.

This is econ 101. Even Paul (“I sold my soul to become a wanker”) Krugman would credit this scenario.

But we ignore econ 101. And so we get this debacle. Ethanol was bad enough when it was just inefficient to produce and wasting more energy than it created. But we actually went further and bought too much of the stuff.

….and today North Dakota is in an energy boom as energy supply grows: http://mjperry.blogspot.com/2012/06/dakota-model-booming-north-dakota-led.html

Even Investment Gurus like J. Grantham of GMO Fall Prey to the “Peak” Resources Theory

Whenever you hear “Peak” this or that just listen to this:http://www.youtube.com/watch?v=ix62PttEfhU

Don’t Believe the hype; never ignore the laws of economics

This entry was posted in Economics & Politics and tagged GMO, Laws of Economics, Peak Oil. Bookmark the permalink.

5 responses to “Whatever Happened to the “Peak Oil” Headlines?”