A Discussion on Money and Gold with a Reader 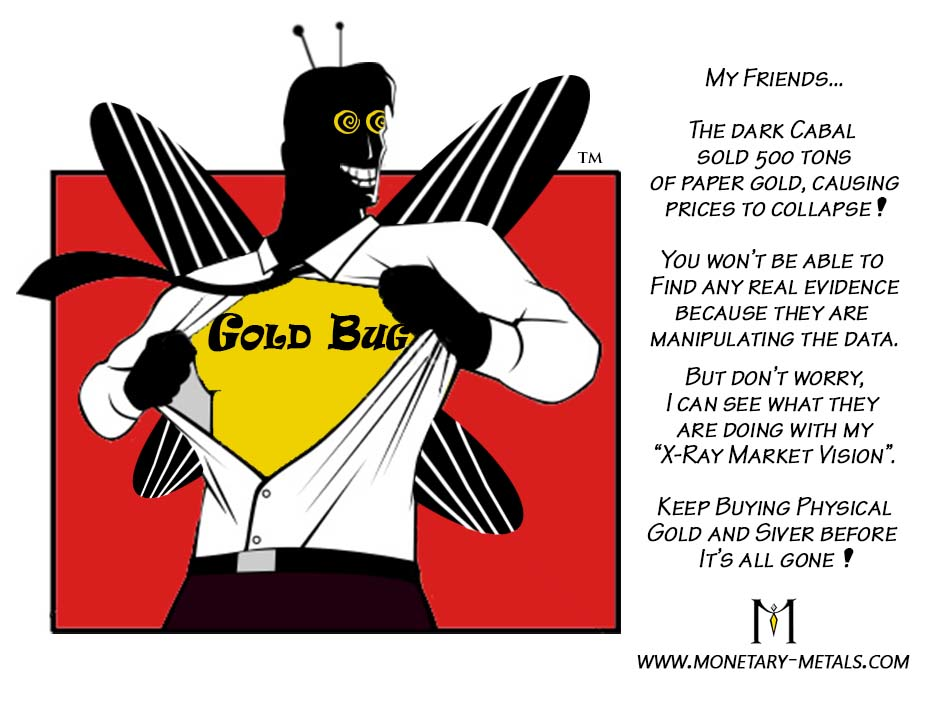 “Find the trend whose premise is false,” says George Soros, “and bet against it.”

Gold bugs seem schizoprenic. Gold prices are manipulated downward; buy more gold!  I think the recent fall in gold has to do with increasing recessionary conditions and "disinflation". But when people realize that real money (financial reserves) can not be replaced by credit and debt then the price decline will reverse.

Imagine you are a major holder of new Lexus cars. Imagine you are in financial trouble. The market for Lexus cars anticipates the upcoming supply. Prices of drop. OK… but are Lexus the same as gold?

Imagine that, instead of Lexus cars, you held cash — a big wad of cash in your vault. Then, in financial trouble, you need get out your cash and use it to pay your creditors. Does the market for cash go down? Does the value of your cash decline because people know you will have to give it to someone else?

The premise is false. Real cash does not become less valuable when people find themselves in financial difficulty; it becomes more valuable. The demand for cash goes up, not down.

But wait. Today’s bills are payable in paper cash…not gold. Debtors must raise paper cash by selling their gold for paper. It’s paper they need… not real money.

Our current system runs on irredeemable, fiat, paper money. People spend it. People borrow it. Now people need more of it to pay their bills. So they sell their valuables — namely, gold — to get more paper money. The Gold price in dollars goes down, while central banks print up more paper money — just to make sure there’s plenty to go around.

One day people will stop worrying about the quantity of the paper and begin worrying about the quality of it.  I am saying gold is commodity money–real money with no liabilities (promise of acceptance).  But I haven’t proven anything, I am putting down thoughts. Next week I will need to prove why I believe that idea has merit. Our goal is to improve our understanding of reality.

I will need to define my terms and prove my premises to debate the reader who provided his thoughts on gold.

First, What is inflation?

The reader in his comments below says inflation is rising consumer prices.

Money is a commodity serving as a medium for exchanges, and–because there has been a recent prior history of exchanges–money can serve as a store of value for future exchanges.

Here is another description: Inflation is tn extension of the nominal quantity of any medium of exchange beyond the quantity that would have been produced on the free market. This definition corresponds to the way inflation had been understood until WWII. The 1941 Funk and Wagnalls Dictionary defined inflation as an “expansion of extension beyond natural or proper limits or so as to exceed normal or just value, specifically over issue of currency.”

A free market  is social cooperation conditioned by the respect of private property rights,” Therefore the meaning of inflation is that it extends the nominal money supply through a violation of property rights.  In this sense, inflation can also be called a forcible way of increasing the money supply (by fractional reserve banking, by monetization of government debt, by counterfeiting, by forgery, etc.) as distinct from the “natural” production of money through mining and minting.

The difference is vast and important. Friedrich A. Hayek stated that his chief objection against monetarist theory is that it pays attention only to the effects of changes in the quantity of money on the general price level and not to the effects on the structure of relative prices. In consequence, it tends to disregard what seems to me the most harmful effects of inflation: the misdirection of resources it causes and the unemployment which ultimately results from it.

So next week I will lay out my premises and show why the distinction is important. A debate without definition and/or agreement of terms is like having a contest to nail jello to a wall.

Pop Quiz: If the FED wanted to increase the velocity of money what could it do? Hint, the effect would be immediate. Why do you think the FED is not doing that? Where are the errors in this report: HIM2013Q1NP

I was a bull on gold for years, but switched bearish during the mania of summer 2011 and have been bearish ever since.  I don't think anybody can argue that central banks are flooding the world with money.  Everyone knows this is occurring and laments about it, and professional investors keep pushing gold.  You'd be hard pressed to find a big name manager who doesn't like gold.

This entry was posted in Economics & Politics and tagged discussion, Gold, money. Bookmark the permalink.