Ebola Outbreak to Help US Economy 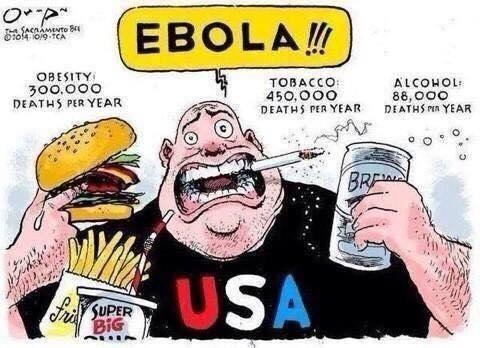 Ebola Comes to America: Krugman & Stiglitz Must Be Delighted

Oh! What a Lovely Pestilence!

Ebola has come to America.  Paul Krugman and Joseph Stiglitz must be delighted.

The core story of Keynesian economists is that government demand, as ideally embodied in war spending, enables economic growth. To illustrate, in a column called “Oh! What A Lovely War!” Krugman asserted: “World War II is the great natural experiment in the effects of large increases in government spending, and as such has always served as an important positive example for those of us who favor an activist approach to a depressed economy.”

It is never quite explained how removing millions of young men from the work force – many of whom never return – to sink ships, destroy factories, and level cities could possibly create wealth; nor how shortages and price controls on the home front could be good for the economy.

But fellow Nobel laureate Joseph Stiglitz agrees with Dr. Krugman’s prescription: “What we need to do instead is embark on a massive investment program-as we did, virtually by accident, 80 years ago. . . . Can we actually bring ourselves to do this, in the absence of mobilization for global war? Maybe not.”

Or maybe so. Last month Lakeland Industries announced the U.S. government had placed an order for 160,000 of its hazmat suits. The stock jumped 30% after the first confirmed case of Ebola on American soil. No Federal Reserve stimulus programs were necessary to create this wealth effect.

If the often-fatal disease spreads, demand for hazmat suits will surge, not to mention hospital clinics, workers to build barricades, security guards to man quarantine checkpoints, probate officers, orphanages, and a host of other government services. It’s a good bet ammunition sales would also rise, along with canned food, firewood, and funeral services, stimulating the private economy. A lovely pestilence could create just as many jobs as a global war.

Former Obama advisor Christina Romer has pointed out: “The lesson [of World War II] is that demand is crucial – and that jobs don’t go unfilled for long. If jobs were widely available today, unemployed workers would quickly find a way to acquire needed skills or move to where the jobs were located.”

And if those jobs were located in the middle of a hot zone, even better. Leftist economists have bemoaned the low price of labor for over a century, advocating various artificial means to raise it, such as boosting the minimum wage and forming unions. But reducing the supply of labor could boost wage rates naturally and permanently.

As Krugman wrote recently about China: “to put it crudely, it’s running out of surplus peasants. That should be a good thing. Wages are rising.” History supports his analysis. The plague in medieval Europe killed between 30% and 60% of the population, which resulted in a sustained increase in wage rates that taught the capitalists a lesson by retarding economic growth for centuries. Ebola similarly offers a chance to solve America’s surplus labor problem and stick it to the capitalists harder than any of Thomas Piketty’s proposals.

As an added bonus, Ebola would save the government trillions. Obamacare Architect Ezekiel Emanuel wrote last month that it is pointless to live past the age of 75. The mind slows, senses weakness, productivity crashes, creatively vanishes: I have liv’d long enough: my way of life / Is fall’n into the sear, the yellow leaf.

And it’s expensive. Most healthcare spending is at the end of life, not surprisingly, when people are the least healthy. If people die young, Obamacare and Medicare will be saved. And, like aborted fetuses in the U.K., the bodies could be used as fuel to heat hospitals, reducing their carbon footprints.

The trillions saved could be spent on more stimulus. In fact, the more people die, the more savings there would be, and the more stimulus would be available to boost the economy for whoever is left. Imagine how rich the survivors would be!

Sadly, Ebola-stricken Liberia is unfamiliar with progressive economics. News outlets report that people are abandoning the fields and factories, leading to shortages, especially of food and fuel. Activity in the services sector has fallen by over 50%. Inflation has doubled. Civil war threatens.

Perhaps what West Africa needs is not more doctors, but a few Keynesian economists. Let us hope Krugman and Stiglitz volunteer.

Daniel Oliver Jr. is the founder of Myrmikan Capital, LLC, and is President of the Committee for Monetary Research and Education.

This entry was posted in Humor & Entertainment and tagged ebola, Krugman, Myrmikan. Bookmark the permalink.