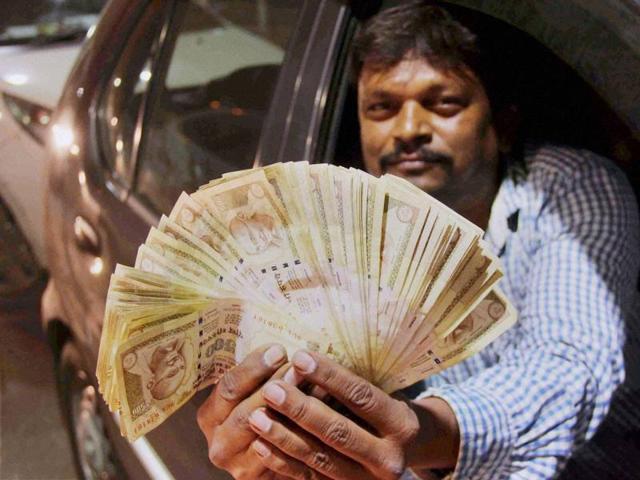 Indian Prime Minister Nahendra Modi has declared 500 and 1,000 rupee notes illegal for exchange. Since these are worth a mere $7.26 and $14.53, he has de facto ended paper currency for use in all major transactions.

Half the population do not have bank accounts, and consumer trade has come to a screeching halt. That is because the highest permitted denomination fetches only about one US dollar, and exchanging the larger notes requires long waits and government identification, which a quarter of Indians do not possess.

Beyond the self-inflicted economic crisis, Jayant Bhandari says India is becoming a police state. She is on a fast track to banana-republic status, before fragmentation into smaller political units.

The gold market in India is in chaos, as people rid themselves of the domestic fiat currency: the price per ounce has skyrocketed to above $2,000, and tax authorities are blocking the retailers. This means the black market is set to boom, as smugglers adapt to the new opportunity, but import demand from India has dropped momentarily, since the formal markets are under the gun.

Another dent in confidence of fiat currencies. What are YOUR thoughts. Lessons?  I will pay $1 million dollars to ANYONE who can tell me how central planning helps people increase wealth over time vs. free exchange.

The balance between quantitative and qualitative research

“There’s so much you can tell in a 10-minute tour of a plant.

I can tell you right away whether we’re making money, if we have quality or delivery issues (so customer issues) and if there’s a morale problem. It’s easy to tell.

But you can’t tell until you go there.”

– Linda Hasenfratz, CEO Linamar Corporation, in conversation with The Women of Burgundy, September 21, 2016

One of the familiar tensions underlying the quality-value investment discipline is the balance between quantitative and qualitative research. Many investors intuitively understand the importance of assessing the quantitative aspects of a business. We analyze the numbers to understand what level of return the business is generating for its shareholders, what level of debt sits on the balance sheet, and whether the cash flows into the business are stable and recurring, for example.

While a quantitative assessment is vital to an investment decision, it is not complete without a qualitative framework to guide its meaning. For instance, it is not just the level of debt on the balance sheet that matters, but whether those debt levels are appropriate for the business. It’s not just a historical record of stable cash flows that gives us confidence, but rather an understanding of the economic moat that protects those cash flows from future competition.

It is with this background that I find Linda Hasenfratz’s quote truly compelling. As CEO of Linamar, she is responsible for running a global manufacturing business that spans 13 countries around the world. She may be able to look at the financial metrics to assess how her business is doing, but for Hasenfratz it is clear that a true, holistic understanding of the business comes from walking the halls of manufacturing plants and speaking face-to-face with her management teams around the world.

Her words were a welcome reminder about the importance of being there, on the ground, to gain a complete qualitative understanding of the operations. As I listened, I felt as if a member of our Investment Team had been dropped into her seat. Take, for instance, the excerpt below from the June 2016 issue of The View from Burgundy, “Boots on the Ground,” which brings us along on a site tour of a Chinese flavour and fragrance company’s R&D facility:

“Normally lab environments are tightly controlled, but in this case, rooms labelled ‘temperature controlled’ had open windows, letting in both the hot summer air and a fair share of local insects. What’s more, the facility was curiously devoid of employees, and the few research staff we did encounter were surly and unapproachable. It seemed odd to us that a company could have its main R&D facility in such a state of inactivity and disrepair, while reporting seemingly world-leading profitability in a highly competitive research-driven industry.

Our negative impression from the site tour provided useful information that would have been difficult, if not impossible, to acquire had we not done the on-the-ground work. It prevented us from making an investment in what had appeared on paper to be an attractive business, provided one didn’t scrutinize its operations – an example of why relying on company-produced financial statements alone is not sufficient when conducting due diligence.”

In other words, the science of investing is never complete without the art.

For background to this article, please see my November 27 article Cash Chaos in India, 86% of Money in Circulation Withdrawn; Cash Still King in Japan.

As one might imagine, chaos ensued. And it continues.

Picking up where we left off, please consider Message to Modi: Do No More Harm by Mihir Sharma.

The chaos accompanying “demonetization” hasn’t eased up noticeably. It seems likely the disruption to the economy, especially in cash-centric rural India, will hit growth sharply for at least a few quarters. It’s tough to say for how long and by how much; we are in uncharted territory here and guesses have varied widely. But many analysts agree with former Prime Minister Manmohan Singh, who’s predicting the new policy will knock 2 percentage points off that world-beating GDP growth rate.

Demonetization was originally sold as a “surgical strike on black money”— the illicit piles of cash many rich Indians have accumulated out of sight of the taxman. It’s now clear the policy has been anything but surgical. Worse, uncomfortable questions are being asked about whether the complicated rules and exemptions that have accompanied demonetization have allowed black-money holders to launder most of their cash. Of late, Modi’s chosen to focus instead on demonetization as means of advancing a cashless economy.

Yet the idea of a war on unaccounted-for wealth remains central to demonetization’s popular appeal, which means Modi will have to find other ways to keep that narrative going. So the government has now begun to push income-tax officials to conduct raids on those who might be concealing assets in forms other than cash, such as gold.

There’s already enough fear of such raids becoming common again that the government felt the need to step in to quell some of the anxiety. That didn’t help much. The government “clarified,”  among other things, the rules governing when tax officials could seize gold: Nothing would happen “if the holding is limited to 500 grams per married woman, 250 grams per unmarried woman and 100 grams per male.” It also said that there would be no limits on jewelry “provided it is acquired… from inheritance.” Also, the “officer conducting [the] search has discretion to not seize [an] even higher quantity of gold jewelry.”

What this means, unfortunately, is that India’s income tax officers have just won the lottery. During a raid, they can, on the spot, decide whether or not to confiscate a family’s gold holdings. And remember, India has an enormous amount of gold — 20,000 metric tons, much of it inherited. (The rules governing simple searches are different, but few know that.) Rather than cleaning up tax administration, the government has handed tax officials more power than they’ve had for decades. The rich will pay what they need to escape harassment; the rest will suffer.

The last line in the preceding article says all you need to know about what’s happening: “The rich will pay what they need to escape harassment; the rest will suffer.”

Evidence suggests the politically connected, and their friends, knew about the ban on cash and acted in advance. Everyone else is stuck.

India’s raid on gold reinforces its ban on cash. Short term aside, these kinds of actions will increase demand for gold.

I keep wondering: what’s next? People pretend they know, I admit I do not. However, I am quite sure a currency crisis is coming. Where it strikes first is unknown, but the list of likely candidates increases every year.

My spotlight has been on Japan, China, and the EU. India caught me off guard, but it adheres to my general theory this pot will eventually boil over in a cascade from an unexpected place, outside the US.

US actions may cause a currency crisis, but I believe a crisis will hit elsewhere first. If I am correct, gold will be the safe haven, regardless of currency, but especially where the crisis hits.