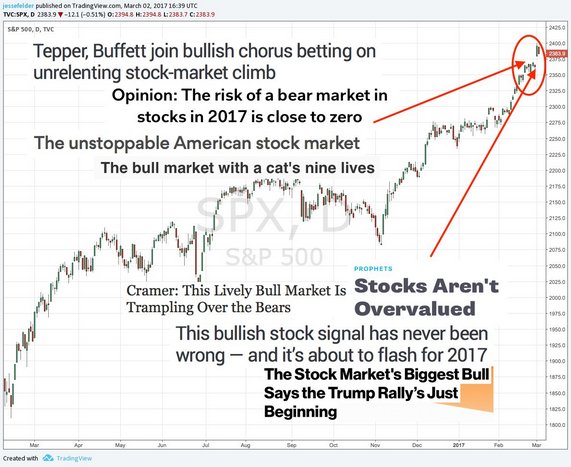 Buffett comments on the shiny metal in his discussion on investors’ choices: The Basic Choices for Investors and the One We Strongly Prefer

This type of investment requires an expanding pool of buyers, who, in turn, are enticed because they believe the buying pool will expand still further. Owners are not inspired by what the asset itself can produce – it will remain lifeless forever – but rather by the belief that others will desire it even more avidly in the future.

The major asset in this category is gold, currently a huge favorite of investors who fear almost all other assets, especially paper money (of whose value, as noted, they are right to be fearful). Gold, however, has two significant shortcomings, being neither of much use nor procreative. True, gold has some industrial and decorative utility, but the demand for these purposes is both limited and incapable of soaking up new production. Meanwhile, if you own one ounce of gold for an eternity, you will still own one ounce at its end.

What motivates most gold purchasers is their belief that the ranks of the fearful will grow. During the past decade that belief has proved correct. Beyond that, the rising price has on its own generated additional buying enthusiasm, attracting purchasers who see the rise as validating an investment thesis. As “bandwagon” investors join any party, they create their own truth – for a while.

Today the world’s gold stock is about 170,000 metric tons. If all of this gold were melded together, it would form a cube of about 68 feet per side. (Picture it fitting comfortably within a baseball infield.) At $1,750 per ounce – gold’s price as I write this – its value would be $9.6 trillion. Call this cube pile A.

Let’s now create a pile B costing an equal amount. For that, we could buy all U.S. cropland (400 million acres with output of about $200 billion annually), plus 16 Exxon Mobils (the world’s most profitable company, one earning more than $40 billion annually). After these purchases, we would have about $1 trillion left over for walking-around money (no sense feeling strapped after this buying binge). Can you imagine an investor with $9.6 trillion selecting pile A over pile B?

Beyond the staggering valuation given the existing stock of gold, current prices (In 2011, gold traded at an average price of $1,700 in $US) make today’s annual production of gold command about $160 billion. Buyers – whether jewelry and industrial users, frightened individuals, or speculators – must continually absorb this additional supply to merely maintain an equilibrium at present prices.

A century from now the 400 million acres of farmland will have produced staggering amounts of corn, wheat, cotton, and other crops – and will continue to produce that valuable bounty, whatever the currency may be. Exxon Mobil will probably have delivered trillions of dollars in dividends to its owners and will also hold assets worth many more trillions (and, remember, you get 16 Exxons). The 170,000 tons of gold will be unchanged in size and still incapable of producing anything. You can fondle the cube, but it will not respond.

Admittedly, when people a century from now are fearful, it’s likely many will still rush to gold. I’m confident, however, that the $9.6 trillion current valuation of pile A will compound over the century at a rate far inferior to that achieved by pile B.

My own preference – and you knew this was coming – is our third category: investment in productive assets, whether businesses, farms, or real estate. Ideally, these assets should have the ability in inflationary times to deliver output that will retain its purchasing-power value while requiring a minimum of new capital investment. Farms, real estate, and many businesses such as Coca-Cola, IBM and our own See’s Candy meet that double-barreled test. Certain other companies – think of our regulated utilities, for example – fail it because inflation places heavy capital requirements on them. To earn more, their owners must invest more. Even so, these investments will remain superior to nonproductive or currency-based assets.

Whether the currency a century from now is based on gold, seashells, shark teeth, or a piece of paper (as today), people will be willing to exchange a couple of minutes of their daily labor for a Coca-Cola or some See’s peanut brittle. In the future the U.S. population will move more goods, consume more food, and require more living space than it does now. People will forever exchange what they produce for what others produce.

Our country’s businesses will continue to efficiently deliver goods and services wanted by our citizens. Metaphorically, these commercial “cows” will live for centuries and give ever greater quantities of “milk” to boot. Their value will be determined not by the medium of exchange but rather by their capacity to deliver milk. Proceeds from the sale of the milk will compound for the owners of the cows, just as they did during the 20th century when the Dow increased from 66 to 11,497 (and paid loads of dividends as well). Berkshire’s goal will be to increase its ownership of first-class businesses. Our first choice will be to own them in their entirety – but we will also be owners by way of holding sizable amounts of marketable stocks. I believe that over any extended period of time this category of investing will prove to be the runaway winner among the three we’ve examined. More important, it will be by far the safest.

CSInvesting: I agree with all the above except that comparing gold as an investment to productive companies is not comparing like-with-like.   Of course, owning a highly productive company or business that can compound over time will beat a sterile asset like cash or gold, but even Buffett will hold cash if he can’t buy great businesses at a good price.   Gold is “money” that can’t be created by governments—by fiat.

An excellent article: Inflation Swindles the Equity Investor by Buffett.

Other views on the current gold market: 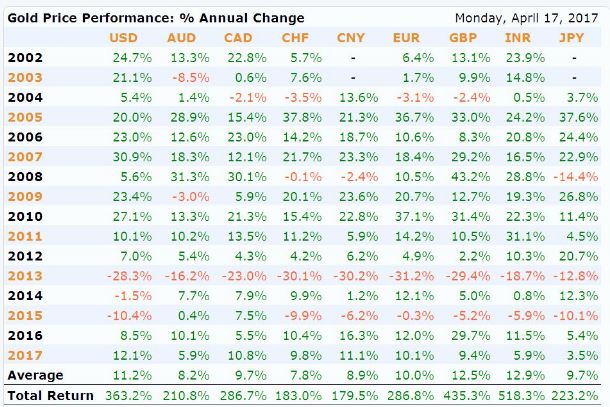 QUESTIONS? Gold as money has far out-performed currencies over the past decades

What are your alternatives?  Quality ain’t cheap………..(source: seekingalpha.com)

This entry was posted in Economics & Politics, Investing Gurus and tagged Buffett, Buffett on gold, Gold. Bookmark the permalink.

5 responses to “Buffett on Inflation, Gold, and Investor Choices”