Strategic Presentation May 2017b    What would show you that this management team allocates capital well in their resource sector?   Are their actions EXTREMELY rare in the Junior Resource Mining industry? 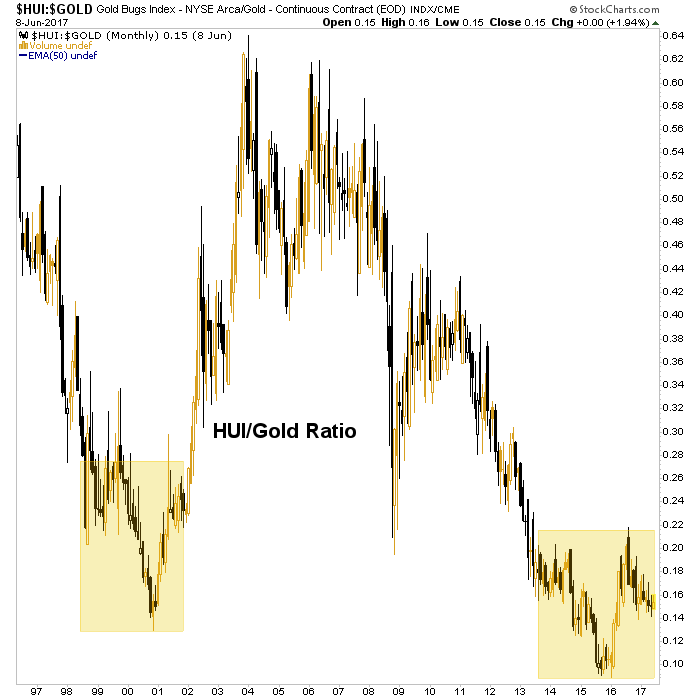 The Perils of Using Sentiment As a Timing Tool

The limitations of sentiment, revisited

In a blog post in March of this year I discussed the limitations of sentiment as a market timing tool. I wrote that while it can be helpful to track the public’s sentiment and use it as a contrary indicator, there are three potential pitfalls associated with using sentiment to guide buying/selling decisions. Here are the pitfalls again:

The third relates to the fact that regardless of what sentiment surveys say, there will always be a lot of bears and a lot of bulls in any financial market. It must be this way otherwise there would be no trading and the market would cease to function. As a consequence, if a survey shows that almost all traders are bullish or that almost all traders are bearish then the survey must be dealing with only a small — and possibly not representative — segment of the overall market.

I went on to write that there was no better example of sentiment’s limitations as a market timing indicator than the US stock market’s performance over the past few years. To illustrate I included a chart from Yardeni.com showing the performance of the S&P500 Index (SPX) over the past 30 years with vertical red lines to indicate the weeks when the Investors Intelligence (II) Bull/Bear ratio was at least 3.0 (a bull/bear ratio of 3 or more suggests extreme optimism within the surveyed group). An updated version of the same chart is displayed below.

The chart shows that while vertical red lines (indicating extreme optimism) coincided with most of the important price tops (the 2000 top being a big exception), there were plenty of times when a vertical red line did not coincide with an important price top. It also shows that optimism was extreme almost continuously from Q4-2013 to mid-2015 and that following a correction the optimistic extreme had returned by late-2016.

Regardless of what happens from here, four years is a long time for a contrarian to be wrong.   See more at http://www.tsi-blog.com

Lesson? Always place data into context and do not rely on any one piece of information.   Sentiment can be useful as part of an over-all picture of a market or company.

Here is an example of an investor who applies that principle in his OWN method of investing. https://www.thefelderreport.com/2017/05/31/how-a-funny-mentalist-learned-to-avoid-annihilation/

He gained INSPIRATION from his investing heroes but did not try to mimic them.

This analyst of gold doesn’t just use news and sentiment but also fundamentals: https://monetary-metals.com/the-anatomy-of-browns-gold-bottom-report-4-june-2017/