For Buffett, Coca-Cola is a prime example of the procreative investment, gold the archetypical other. For us, we submit that the chairman has failed to take proper account of today’s unique monetary backdrop. Interest rates are uncommonly low, worldwide monetary policy unprecedentedly easy. No institution under the sun is so procreative as the quantitatively easing central bank. Faster than even the best business can spin cash flow, the Federal Reserve can materialize scrip. What to do about this novel fact is one of the foremost investment questions of our time. (www.grantspub.com March 9, 2012 Vol 30, No. 5)

From http://www.berkshirehathaway.com/letters/2011ltr.pdf…The major asset in this category is gold, currently a huge favorite of investors who fear almost all other assets, especially paper money (of whose value, as noted, they are right to be fearful). Gold, however, has two significant shortcomings, being neither of much use nor procreative. True, gold has some industrial and decorative utility, but the demand for these purposes is both limited and incapable of soaking up new production. Meanwhile, if you own one ounce of gold for an eternity, you will still own one ounce at its end.

What motivates most gold purchasers is their belief that the ranks of the fearful will grow. During the past decade that belief has proved correct. Beyond that, the rising price has on its own generated additional buying enthusiasm, attracting purchasers who see the rise as validating an investment thesis. As “bandwagon” investors join any party, they create their own truth –for a while.

OK, I don’t disagree with Buffett on investing in a franchise company that can pass along prices because of its competitive advantage as long as the price you pay is not above value.  Go here: http://www.scribd.com/doc/78158885/Ko-35-Year-Chart to view the 50-year chart of Coca-Cola.  Sales, cash flows, earnings, and dividends rose steadily from 1997, year the price declined for 12 years to 2009. Why?

Back to Buffett, he says when you own one ounce of gold you will only have an ounce of gold instead of cash flow (until sold or exchanged) or earnings. True, but gold is not (in my opinion) an investment but more of a medium of exchange (See The Origins of Money and Its Value http://mises.org/daily/1333). An ounce of gold bought a quality man’s suit 100 years ago and the same is approximately true today. Gold is the reciprocal of fiat currency debasement. Unless the world’s central banks are at a top in currency debasement then picking a top in gold will be foolhardy.

Read, This Time is Different: Eight Centuries of Financial Folly by Carmen M. Reinhart and Kenneth S. Rogoff, to gain perspective on what central banks do when confronted with heavily indebted governments. Print!

Buffett’s other arguments are true regarding bubbles; people go too far. What ends will end. So let’s invert and ask, have we seen the end of rapid currency debasement? Are people’s belief in fiat currency strengthening or weakening. What has changed?

Thatcher in 1990 Predicting the Crisis in Europe

Margaret Thatcher in 1990 predicts the outcome of the ECB’s policies (No! No! No!): http://www.youtube.com/watch?v=Tetk_ayO1x4&feature=related

Note how prescient she was. She didn’t really predict, but she did combine human nature, economic law and causality to see what was to come.  Who knew that giving a non-elective body with central control of one currency would lead to Europe’s disaster? A Classic.

Wayne Angel discusses the Federal Reserve and the European  Central Bank.  Mr. Angel says, “The Board of Governors of the Federal Reserve Board  has the responsibility to be restrained from creating (printing) too much  currency in order to provide price stability and full employment. I ask the reader, “Has a government EVER shown restraint in printing fiat currency? If prices send signals to producers and consumers in how to allocate resources, wouldn’t interfering in the price discovery process to “stabilize” prices only distort capital allocation decisions?”

Mr. Angel goes onto to explain the government intervention and folly in the U.S. housing market,”Congress thought that every American had the right to own a house.”  Given that disaster, what has really changed to prevent another calamity? Tick-tock. 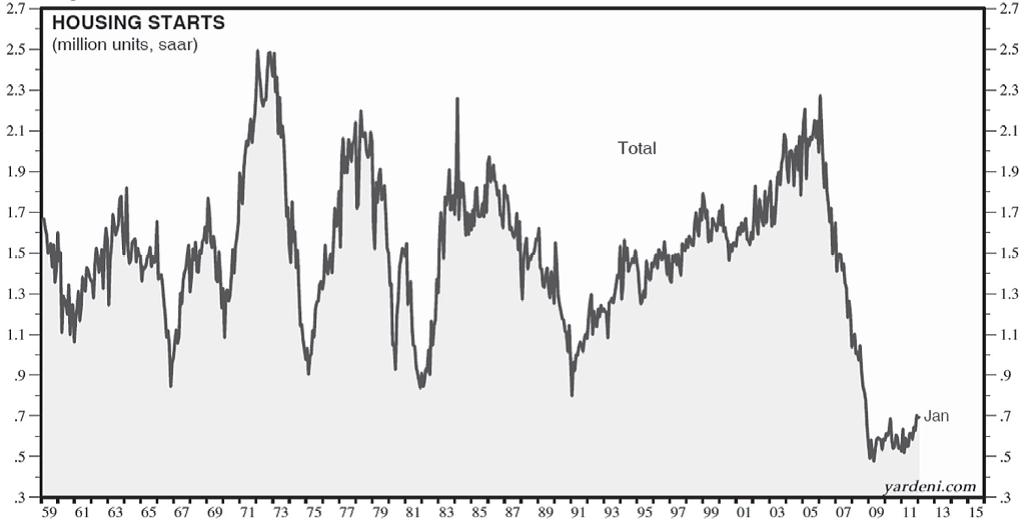 The above chart shows how prices do their work in allocating resources. The decline in housing starts will help being about an improving market for homes for either buying or renting.  Markets do work–even hampered markets.

I try my best not to be reflexively contrary unlike the man in this clip who can only contradict people: http://www.youtube.com/watch?v=bf47iNBt_qg&feature=related