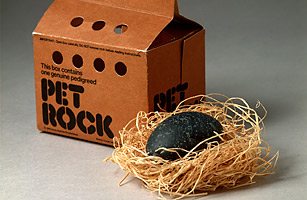 Imagine owning a pet that doesn’t need to be trained, walked, fed or groomed — ever. That’s exactly what California ad executive Gary Dahl was after when he came up with pet rocks in 1975. Tired of the hassle and responsibility that came with animate house pets, Dahl developed a toy concept that was 1% product and 99% marketing genius: a garden-variety rock, packaged in a comfy cardboard shipping crate, complete with straw for the rock’s comfort and holes so it could breathe during transport. The Pet Rock Training Manual — a tongue-in-cheek set of guidelines for pet owners, like housebreaking instructions (“Place it on some old newspapers. The rock will never know what the paper is for and will require no further instruction”) — helped turn the scheme from an amusing gag gift into an inexplicable toy craze. By Christmas 1975, Americans were hooked. Although the fad was long gone by the following year, the rocks — which were collected from a beach in Baja, Calif., for pennies each and retailed for $3.95 — made Dahl a multimillionaire in about six months. https://en.wikipedia.org/wiki/Pet_Rock and The-Care-and-Training-of-Your-Pet-Rock-Manual-by-Gary-Dahl

BEFORE I became a value investor, I was addicted to bubbles.  I have over 1,200 Pet Rocks lining my Python cage.  I don’t know what the price chart says, but it doesn’t look good that I will be able to resell at a profit.

Also, I have 20,000 Beanie Babies rotting/mildewing in my basement as well.

An amazing story of mass delusion and the dark side of cute. 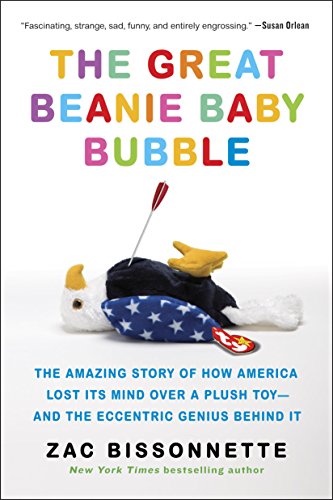 How to be a Stoic: http://www.perell.com/podcast/massimo

Edward Thorp: I came at the securities markets without basically any prior knowledge and I educated myself by sitting down and reading anything I could lay my hands on. I began to get oriented, and then I discovered how to evaluate warrants, at least in an elementary way, and I decided that was a way that I could apply mathematics and logical thinking and maybe get an edge in the market.

Posted in Risk Management, Uncategorized, YOU