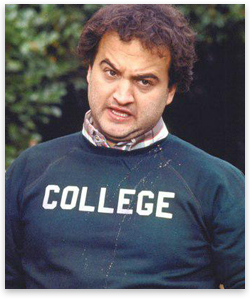 An educated person is one who has learned that information almost always turns out to be at best incomplete and very often false, misleading, fictitious, mendacious – just dead wrong. –Russell Baker

An education isn’t how much you have committed to memory, or even how much you know. It’s being able to differentiate between what you know and what you don’t. –Anatole France

Develop a passion for learning. If you do, you will never cease to grow. –Anthony J. D’Angelo

Mark Cuban on the coming revolution in education

This is what I see when I think about higher education in this country today:

Remember the housing meltdown ? Tough to forget isn’t it. The formula for the housing boom and bust was simple. A lot of easy money being lent to buyers who couldn’t afford the money they were borrowing. That money was then spent on homes with the expectation that the price of the home would go up and it could easily be flipped or refinanced at a profit.  Who cares if you couldn’t afford the loan. As long as prices kept on going up, everyone was happy. And prices kept on going up. And as long as pricing kept on going up real estate agents kept on selling homes and finding money for buyers.

Until the easy money stopped.  When easy money stopped, buyers couldn’t sell. They couldn’t refinance.  First sales slowed, then prices started falling and then the housing bubble burst. Housing prices crashed. We know the rest of the story. We are still mired in the consequences.

Can someone please explain to me how what is happening in higher education is any different ?

Its far too easy to borrow money for college.  Did you know that there is more outstanding debt for student loans than there is for Auto Loans or Credit Card loans ? The point of the numbers is that getting a student loan is easy. Too easy.

As an employer I want the best prepared and qualified employees. I could care less if the source of their education was accredited by a bunch of old men and women who think they know what is best for the world. I want people who can do the job. I want the best and brightest. Not a piece of paper.

The competition from new forms of education is starting to appear. Particularly in the tech world. Online and physical classrooms are popping up everywhere. They respond to needs in the market. THey work with local businesses to tailor the education to corporate needs. In essence assuring those who excel that they will get a job. All for far far less money than traditional schools.

Let me add some clarification here based on some of the comments. I include the Online For Profit Mills that live off of the government delivering student loans as part of traditional education. Phoenix, Strayer, etc, they are not the new generation of Branded Education I am referring to. They are a big part of creating the bubble. i should have gone into more depth here. I will save it for another post.

As far as the purpose of college, I am a huge believer that you go to college to learn how to learn. However, if that goal is subverted because traditional universities, public and private, charge so much to make that happen, I believe that system will collapse and there will be better alternatives created.

Leave the for profit online schools that create more employment for debt collectors than their students out of the equation and we still have an enormous bubble in Higher Education that is having a horrible impact not just on the economic life of their students, but on the economy as a whole as well

The Higher Education Industry is very analogous to the Newspaper industry. By the time they realize they need to change their business model it will be too late. Higher Education’s legacy infrastructure, employee costs /structures and debt costs will keep them from being able to re calibrate to a new generation of competitors.

For those that want to fork over $100,000s to go to a typical university over four years, you should start saving now. This blog will help: http://mjperry.blogspot.com/2012/05/five-money-saving-websites.html

The underlying problems of Greece–a Welfare State and Rigid Wages