Surprise! Inflation Rising and One-Half of the Investment Equation

The most difficult question was, “How does Stephen Hawkins’ Theory of Relativity compare to Einstein’s?

The question of moderate difficulty was, “Who do you think will win the World
Series this year?”

The question designed for the lowest of intelligence was, “What do you think of the stock market?”

Inflation & Debasement and a False Boom

Predicting the direction and timing of the market is a fools’ game, but not to be aware of the underlying forces in the economy will hurt you as an investor.  Right now, (October 18th, 2011) the Federal Reserve is hoping to ignite a (nominal) boom in asset prices. The stock market may go up, but the real return relative to other asset prices may not be as great. If you understand the
Austrian Business Cycle Theory, and you observe the Federal Reserve’s actions,
then the boom in producer prices is not a surprise. For the past 39 years the
world’s currency system has not been anchored to something of intrinsic value. We live in a world of fiat currencies (the PhD Standard) and fractional
reserve banking—Ponzi Finance—so not to be aware of what is occurring is financial suicide.

Half of the Investment Problem

As you take a dollar out of your pocket to invest in a company, you hope that when you sell your investment, the share(s) of stock, the dollars that you receive
will purchase a similar or greater basket of goods and services. You spend
hours studying a company as an investment, but why not spend a minute thinking about what gives value to the dollar in your pocket? What effects that dollar is one-half of every investment decision.

Today Producer Price Index rose 0.8% or 9.6% annualized. How would you like to own 30-year government bonds generating 3.5%? Ouch!  How could anyone be surprised if you saw these statistics from the Federal Reserve:

The growth in money supply is just one-half of the equation, the other half is the
demand for money based on loan demand and banks’ ability and willingness to
lend. However, seeing half the cards while you opponent sees none is an
advantage. More importantly, you need a theory to understand economic laws of cause and effect that will give you understanding of where you are in an investment cycle.

I have been warning about inflation here: http://csinvesting.org/2011/09/19/current-inflation-charts/

I posted an article on investing and inflation here: http://csinvesting.org/2011/09/16/inflation-hyperinflation-and-investing-with-klarman-buffett-and-graham/

Oh how I wish when leaving the University with a BA in Economics I was told to unlearn every lesson and study Austrian Economics.  It’s what you think that’s so that isn’t so which KILLS YOU.

The best way to learn about how the economy works, booms and busts and what affects the value of your money would be to go here:

A course in economics: http://www.tomwoods.com/learn-austrian-economics/   An incredible learning resource

If you are ambitious, then further study here: http://www.capitalism.net/

For an update on inflation: www.economicpolicyjournal.com) 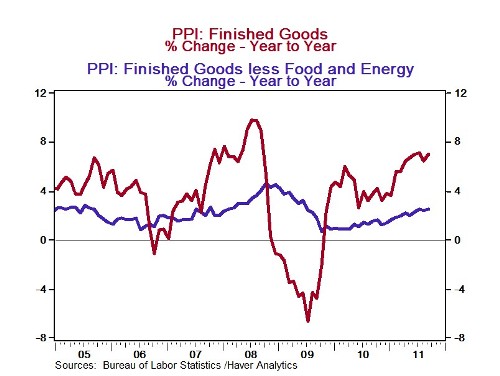 Currently, Bernanke is printing money (M2) at very aggressive double-digit rates. It is this money printing that is fueling the manipulated boom. Since Keynesians don’t watch or understand the role money creation causes in the Fed created boom-bust cycle, they don’t see the manipulated boom coming until it is actually reflected in the economic data. That’s why, at present, the data are surprising them to the upside. The new Fed created money is pushing the economic data higher, but since they don’t understand Austrian Business Cycle Theory or “ABCT”, they won’t understand what is going on in the data until months of data role in showing the change in trend.