Readings and Batten Down the Hatches 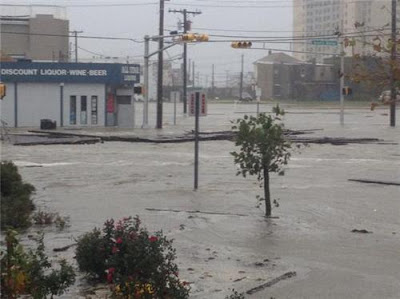 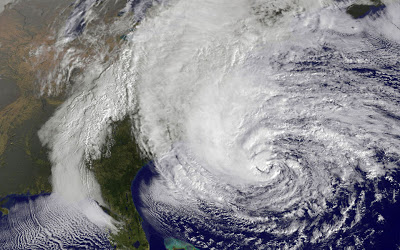 – With Sandy having already brought severe impacts to the Caribbean Islands and a portion of the Bahamas, and severe erosion to some beaches on the east coast of Florida, it is now poised to strike the northeast United States with a combination of track, size, structure and strength that is unprecedented in the known historical record there.

– Already, there are ominous signs: trees down in eastern North Carolina on Saturday, the first of countless that will be blown over or uprooted along the storm’s path; and coastal flooding in Florida, North Carolina and Virginia Saturday and Sunday, these impacts occurring despite the center of circulation being so far offshore, an indication of Sandy’s exceptional size and potency. Sustained tropical storm force winds were already measured at a buoy just offshore of New York City Sunday evening, 24 hours before the closest approach of the center.
– A meteorologically mind-boggling combination of ingredients is coming together: one of the largest expanses of tropical storm (gale) force winds on record with a tropical or subtropical cyclone in the Atlantic or for that matter anywhere else in the world; a track of the center making a sharp left turn in direction of movement toward New Jersey in a way that is unprecedented in the historical database, as it gets blocked from moving out to sea by a pattern that includes an exceptionally strong ridge of high pressure aloft near Greenland; a “warm-core” tropical cyclone embedded within a larger, nor’easter-like circulation; and moisture from the tropics and cold air from the Arctic combining to produce very heavy snow in interior high elevations. This is an extraordinary situation, and I am not prone to hyperbole.

– That gigantic size is a crucially important aspect of this storm. The massive breadth of its strong winds will produce a much wider scope of impacts than if it were a tiny system, and some of them will extend very far inland. A cyclone with the same maximum sustained velocities (borderline tropical storm / hurricane) but with a very small diameter of tropical storm / gale force winds would not present nearly the same level of threat or expected effects. Unfortunately, that’s not the case. This one’s size, threat, and expected impacts are immense.
– Those continue to be: very powerful, gusty winds with widespread tree damage and an extreme amount and duration of power outages; major coastal flooding from storm surge along with large battering waves on top of that and severe beach erosion; flooding from heavy rainfall; and heavy snow accumulations in the central Appalachians where a blizzard warning has been issued for some locations due to the combination of snow and wind. With strong winds blowing across the Great Lakes and pushing the water onshore, there are even lakeshore flood warnings in effect as far west as Chicago.

– Sandy is so large that there is even a tropical storm warning in effect in Bermuda, and the Bermuda Weather Service is forecasting wave heights outside the reef as high as 25′.

– There is a serious danger to mariners from a humongous area of high seas which in some areas will include waves of colossal height. Wave forecast models are predicting significant wave heights up to 50+ feet, and that is the average of the top 1/3, meaning that there will be individual waves that are even higher. A buoy between North Carolina and Bermuda measured significant wave heights of ~40′ Sunday evening. The Perfect Storm, originally known as the Halloween Storm because of the time of year when it occurred, peaking in 1991 on the same dates (October 28-30) as Sandy, became a part of popular culture because of the tragedy at sea. This one has some of the same meteorological characteristics and ingredients coming together, but in an even more extreme way, and slamming more directly onshore and then much farther inland and thus having a far greater scope and variety of impact.

Goodwill Hunting: Being in the Storm

Why I don’t work for the Government

This entry was posted in Uncategorized and tagged goodwill hunting, Pzena, Regime an uncertainty, storm. Bookmark the permalink.