Reader’s Question
I’ve been reading your blog with great interest.
Curious to know where you think this flagging market is heading from here. I’m content to sit on the sidelines and watch a little longer.
My reply: The only idea more frightening than someone believing I know where the market is headed, would be if I believed I could predict the market. Predicting the market which is a complex adaptive system falls into the area of important but unknowable. 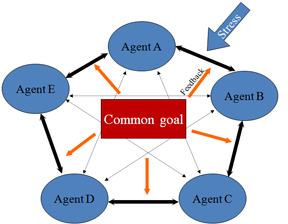 A complex adaptive system is  an open, dynamic and flexible network that is considered complex due to  its composition of numerous interconnected, semi-autonomous competing and collaborating members. This system is capable of learning from its prior experiences and is flexible to change in the connecting pattern of its members in order to fit better with its environment.  No wonder that neither mathematical formulas nor science can capture or predict human action. I think Ben Graham said roughly in these words, “Don’t confuse fancy math for thinking.”
As a reader recommends:

No need to predict the market
But an investor doesn’t have to predict, he or she has to find lopsided bets or “value.” I try to buy franchise companies–those with competitive advantages evidenced by steady market share and high returns on ivested capital over time–usually a ten year time period. These companies are rare but obvious like Coke, Novartis, General Mills, Stryker, Exxon, etc. The issue is what price to pay. Two years ago, several franchise companies were trading at or below the average company; they were bargains. Why?  Perhaps because prices adjusted from the over-valuations of ten years ago (Coke being an example). Most of the time you track these 80 to 140 companies and wait for a sale to occur during a market downturn, “missed” earnings report, product recall or some temporary problem.
MasterCard Franchise: Buffett and Beyond MAstercard
Search strategy
You also need to be aware of companies that can become franchises or can dominate a niche–Autozone, WDFC, and Cell Tower Companies, etc.
Then you have special situati0ns where there is some event to unlock value–SHLD spinning out SHOS, for example. the stock is up 50% in three months, so opportunity is everywhere.
Look for where the fear is greatest or where there is MAXIMUM PESSIMISM
Even with the “market” flirting with new highs, you have segments like junior mining c0mpanies (GDXJ) making new multi-year lows as people throw in the towel after years of disappointing returns. Usually, the problems are well-advertised–Mining companies are losing speculative buyers to ETFs, costs are rising faster than revenues, capital is scarcer, companies have misallocated capital in the quest for size, stocks are back to where they were five years ago but the gold price has doubled–and known. A mining company is a hole in the ground with a liar on top, so you better be careful if you wish to pick through the debris or just ignore and look elsewhere.
Focus on the particular
So who cares where the market is going? Focus on particular companies and where the fear, disgust and neglect are greatest. Unfortunately, for me that appears to be the precious-metals mining sector.  If I can find several free call options on gold and silver, I will buy as long as I don’t over concentrate. Pray for me.
Pundits
Another trick is to ask yourself why the pundit on CNBC is sharing their prediction of where the market is going. Why tell?
As the two-penny philosopher once opined, “There are many who don’t know that they don’t know while those that know, don’t say.”
Understand the manipulation of hampered markets
That said, this writer suggests any investor go to www.mises.org and download the free books there and understand the Austrian Business (Trade) Cycle.  There are huge misallocations of capital going on now, so be prepared.
Jim Grant on our current situation
Listen to what Grant’s has to say about the Fed and the money madness.
http://search1.bloomberg.com/search/?content_type=video&page=1&template=tv&q=james%20grant
Good luck.
I hope that helps
This entry was posted in Search Strategies and tagged Grant's, The Fed. Bookmark the permalink.