Of Interest and for Reference: Bubbles 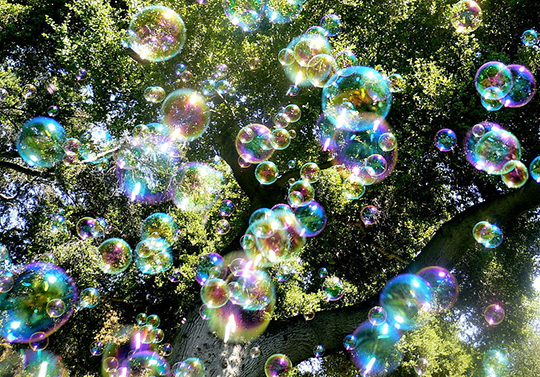 I use this blog sometimes as a bulletin board so I can look back in time over events.

Yes, this is an equity bubble:

At present, the major risk to economic stability is not that the stock market is strenuously overvalued, but that so much low-quality debt has been issued, and so many of the assets that support that debt are based on either equities, or corporate profits that rely on record profit margins to be sustained permanently. In short, equity losses are just losses, even if prices fall in half. But credit strains can produce a chain of bankruptcies when the holders are each highly leveraged. That risk has not been removed from the economy by recent Fed policies. If anything, it is being amplified by the day as the volume of low quality credit issuance has again spun out of control. http://www.hussmanfunds.com/wmc/wmc140728.htm

Here is a simple exercise that we all should do individually to help us with real estate related decisions: 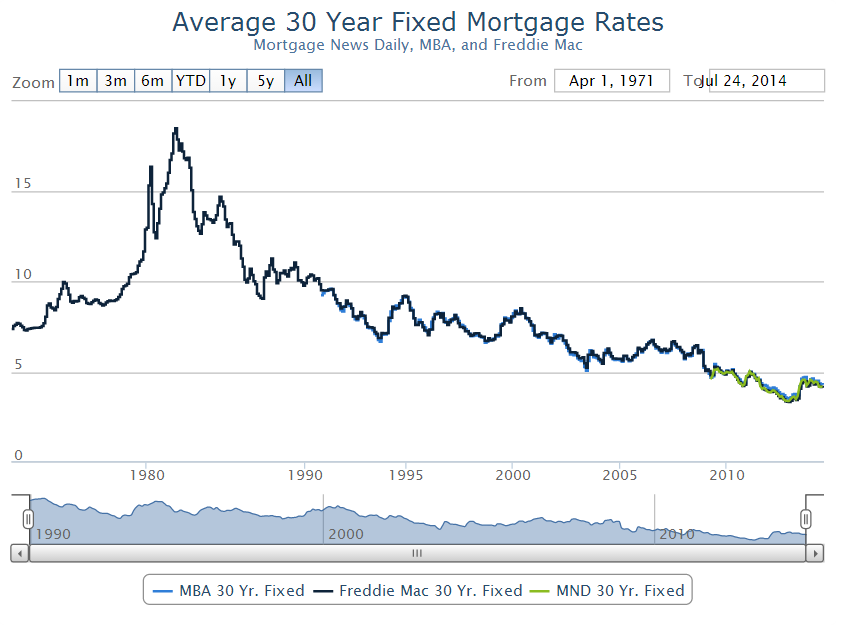 1.  Extend the above chart for the next 5 years.  What do you think it is going to look like?

2. Give this some thought.  Do you think real estate prices should be inversely proportional to the decline in mortgage rates?

3. Use your own real estate purchase as an example.  Mark the date of purchase and plot its price movements over the above chart.  If you think falling mortgage rates should stimulate prices, is that true in your case?

In conclusion, does Fed policy really have anything to do with the real estate market?  I believe Fed policies have been misguided for far too long, artificially propping up prices that should be much lower.

Whether you agree or disagree, does it appear that the Feds are finally at the end of the rope? http://www.acting-man.com/?p=32011#more-32011 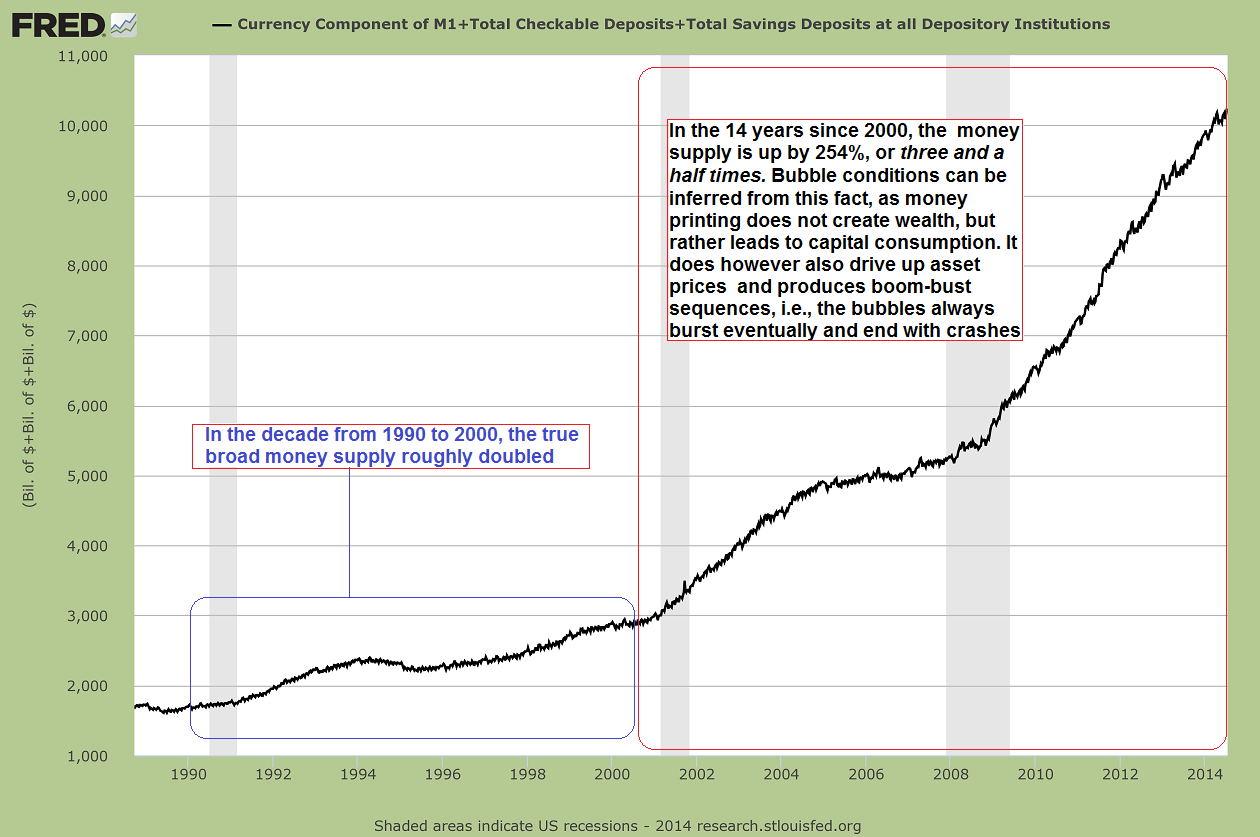 If one wants to identify bubbles, one must perforce study monetary conditions. The comparison of historical data on valuations and other ancillary factors can only take one so far. The problem is that in times of strongly inflationary policy, the economy’s price structure becomes thoroughly distorted, and that therefore a great many “data” can no longer be regarded as reliable. An added complication is that we e.g. cannot know in advance if the effects of the inflationary policy on prices will broaden out or not. Should “inflation expectations” (expectations regarding future CPI rates of change) rise markedly in the future, this would have a major impact on valuations, which would then begin to contract rather than continue to expand. 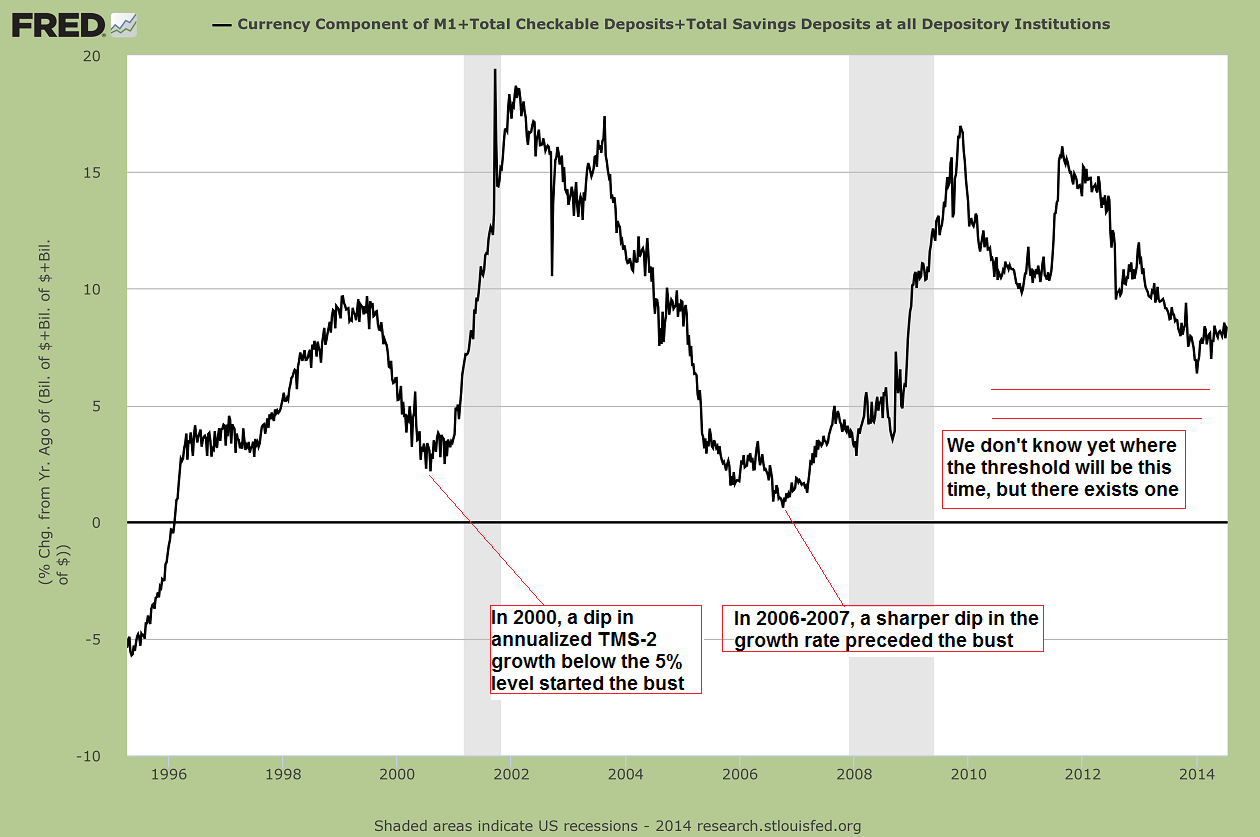 However, a bubble can easily burst even if this doesn’t happen. Ultimately the question is whether brisk money supply growth will be maintained and whether the economy’s real pool of funding is still large enough to allow for additional diversions of scarce resources into bubble activities. Most of the time, it the eventual slowdown of money supply growth that brings a bubble to its knees.  http://www.acting-man.com/?p=32003#more-32003

“Conditions for a hard economic landing — like slack in the labor market and weak balance sheets — are still largely absent.”

If the case for U.S. stocks is built on global growth and lower interest rates, other factors, too, suggest that the market is heading higher. For one, Washington is determined to avert a financial disaster, particularly in an election year….

Bull markets rarely end when the earnings yield on stocks — now around 6% — is higher than benchmark bond yields.

While some fear this year’s peak profit margins will wane, __________ says “margins will prove sticky at a high level” after years of cost-cutting. A 35% decline in leverage in the past five to seven years has made for healthier balance sheets, and continued stock buybacks are likely to keep boosting earnings per share.

Then there’s the market’s modest valuation. The S&P 500 trades today at just 15.6 times average estimated earnings — well below the average P/E of 18.6 times earnings during periods when inflation was at similarly muted levels in the past 57 years…

“The right time to get more aggressive [about the stock market] is closer to the end of the Fed’s easing cycle,”

“While the first half may look like death, second-half earnings will improve….

“The consumer is not dead!”

What’s more, the richest 20% of Americans drive 40% of the country’s consumer spending, and their outlays are less restrained by rising gasoline prices and higher mortgage rates. Dated Dec. 17, 2007

I think most investors have the wrong idea about what it means to be bullish or bearish about an asset class such as stocks. Being bullish or bearish is not an all or none decision. Believing that the US stock market is richly priced does not mean that all US stocks are richly priced. It just means that the market, taken as a whole, is priced at a level that involves an above average level of risk. That risk, as last year so amply demonstrated, may not be realized in the short run or even what some might consider the long run. But the risk still exists and investors should take it into account when allocating their assets.

Peter Bernstein, one of the greatest investors who ever lived, once said: Survival is the only road to riches. What that means to me is that, in a world where the future is unpredictable (that would be the one we live in), one must take into account the worst case scenario as an investor. What you shouldn’t do, as the quotes above prove, is take conditions as they exist today and assume they will continue into the future. Profit margins are always high when the economy is expanding and they always fall in a recession. You may not know when a recession will come but you know it will. Survival investing dictates that you take into account what happens to margins in a recession. Stock buybacks – at least since tax reform made them preferable – are always high when things are good and always disappear when the market needs them most.

You don’t have to know exactly how things will change just that they will. In any scenario with multiple potential outcomes you have to at least consider all the alternatives. No matter what you expect, you have to assign some probability to the opposite outcome. If you believe the economy will accelerate in the second half of the year, what are the consequences of being wrong? In a highly priced market, being wrong about future growth could prove quite costly. It is the consequences of being wrong that reveal your true risk level.

Chris Mayer: The US Debt Crisis That Will Never Happen  Posted July 23, 2014

… There is an economist, Scott Fullwiler, who explained this in a post at the New Economic Perspectives blog site:

“A currency-issuing government under flexible exchange rates can’t have such crises, because it doesn’t need to borrow its money; interest rates on its debt are a monetary policy variable. The doomsayers have been at this for decades now, but have not explained why the U.S., U.K. and Japan ran continually large deficits starting in 2008 at low interest rates while Greece, Spain, Italy, etc., could not… At some point, one would think the ‘U.S. could become Greece’ argument would be widely recognized as fraudulent, but if you’re in the wrong paradigm, it’s difficult to accept even a simple explanation of why the paradigm is wrong.”

Hopefully, you can accept a simple explanation.

It’s true there are constraints. For example, there’s the debt ceiling. But this is a self-imposed restriction.

There is no reason why the U.S. should have a fiscal crisis of any sort. Such a crisis could only be self-imposed. So the real risk is that policymakers don’t understand how their own fiat currency works. The real risk is that they listen to the CBO.

.. If you don’t get the realities, then you invest foolishly. If you believe Epstein is right, then you’ll likely miss out on all kinds of great investment ideas because you’ll be afraid of a looming debt crisis. Instead, you’ll put your money in junky gold stocks — as if that will protect you!

(What do YOU think?)

Inflation rearing its head in Dollar Based Panama:

Locals and foreigners alike pay US dollars for goods and services across Panama just as you would in Houston, Jacksonville, or Las Vegas.

This means that the country is subject to all the whims and consequences of US monetary policy; when the Fed conjures money out of thin air, the negative effects are quickly exported to Panama.

Yet while it suffers all of the downside of quantitative easing, Panama enjoys very little of the upside. Of the jobs that the Fed claims they have created by printing $3.7 trillion over the last few years, zero of those have ended up in Panama. Not to mention, the Panamanian government doesn’t have an endless supply of foreigners lining up to buy its debt.

So to get a true sense of US dollar inflation… and where it’s headed in the Land of the Free… one only need look at dollarized countries like Panama.