Petrobras: Bloated with debt and run by the Brazilian Government–a short-seller’s wet dream. I use this as a hedge against investments in US oil and gas companies.  But, the short on its own, PBR is a good proxy for the failures of “socialism.” 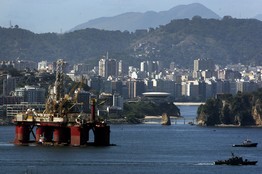 Oh, look at how the US Govt. runs its monopoly: Post_Service_Revenue_Volume_USPS-112879

THE FED MONEY PUMPING WILL CONTINUE FOR AT LEAST A HALF YEAR, MAYBE MUCH LONGER

Chicago Fed President Charles Evans says Fed policy will remain accommodative until the economy improves. His definition of “improvement” is not clear/Evans said the $85 billion per month of asset purchases is needed to get the run started. “We’re loading up with carbs, energy bars. We’re going to do that until we’re clear that the labor market outlook has improved. It might be a half a year, it might be a whole year, could be longer,” he said.

The Fed policy of quantitative easing is designed to rebuild the asset inflation edifice that collapsed in 2008. (Mal-investment here we come!)German banker and economist Kurt Richebacher provided some of the earliest warnings of the dangers. In his April 2005 newsletter, he wrote that “there is always one and the same cause of asset inflation, and that is credit creation in excess of current saving leading to demand growth in excess of output.

….The rising Dow is good news for savers, who have been forced into equities to try to find a decent return on investment. Thanks to Fed policy, “safe” 10-year Treasury bond yields near-zero or negative return, depending on whether you measure price inflation at the official rate or at higher private companies.

….But an economy built on an illusion is hardly a sound structure. We may be doomed to learn that lesson once again before long.  Wall Street Journal, Feb. 8, 2013