Back to the Future; NCAV Strategy

Home » The Financial Report » The Great Gold Conspiracy of 1869

The Great Gold Conspiracy of 1869

William Worthington Fowler’s Twenty Years of Inside Life in Wall Street or Reflections of the Personal Experience of a Speculator is a joy to read.  (I second that opinion). 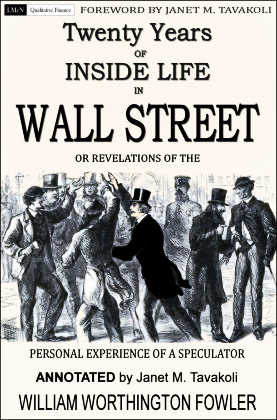 Fowler’s ripping yarn covers the New York traded markets from 1860-1880, a period that spanned the Civil War, the post war bubble, worthless paper money, the Black Friday Gold Panic of 1869, the Great Panic of 1873, and the consequent first and worst seven year Great Depression. Fowler witnessed how U.S. government paper money replaced specie leading to bubbles, panics, and crashes. It is time to revisit Fowler’s classic. Our current crisis is much more similar to the crash of 1873 and the first Great Depression than the 1929 crash and Depression. History repeats itself, especially in finance.

Main stream media sometimes suggests that conspiracies are only for anonymous people who lurk on the internet, or people who send you poorly written emails from yahoo accounts. But conspiracies are as American as apple pie. One of my favorite conspiracies is The Great Gold Conspiracy of 1869. Fowler provides details of the New York financiers who cooked that one up.

“Here, sitting at their ease, surrounded by luxury, in a magnificent apartment, with shrewd lawyers at their elbow, two confederates plotted The Great Gold Conspiracy of 1869, and coolly organized the ruin of thousands.”

“From April, 1865, to September, 1869, a period of more than four years, the movements of gold had been brought about by artificial means, in conjunction with commercial causes, or rather pretexts. The price of Government Bonds abroad, wars or rumors of wars in Europe, disturbances of trade, the shipments of the precious metal in payment of our imports, sales of gold by our government; these and a thousand other strings were harped upon by the gold gamblers to produce those singular upward and downward oscillations in the price, which enriched the members of the Gold Board, while they disturbed the peace of commerce and beggared a host of infatuated outside dealers.”

“Wall Street, like history, repeats itself. Every summer, since 1865, there had been a rise in gold. In March, 1869, gold fell to 131. The astute intellect of Jay Gould now foresaw another opportunity to push up the price of gold, and having purchased $7,000,000 of it, by playing on the strings of the Cuban insurrection, the Alabama difficulties, the prospect of a war between France and Prussia, etc., terrified the bears and rushed up the price to 145. Emboldened by the success of this move, he formed a new and daring scheme.”

An intelligent strategy for some of us http://seekingalpha.com/article/3999423-great-ncav-experiment-portfolio-inception

This entry was posted in Uncategorized and tagged 1860 to 1880. Bookmark the permalink.