The Annuity Puzzle by Richard Thaler 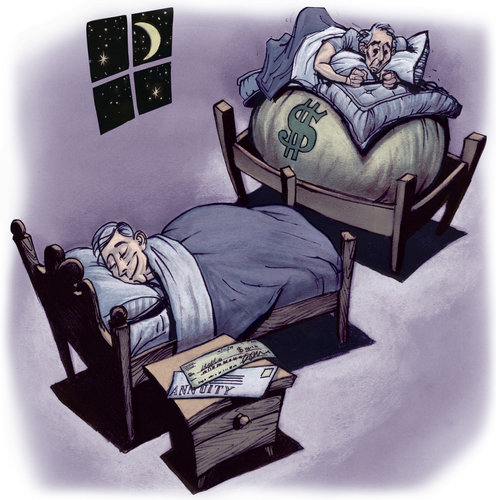 “Annuities and the Puzzle of Income”

Can anyone point out several omissions and/or fallacies in this article by the famous professor Richard Thaler? Just a sentence or two.

IMAGINE a set of 65-year-old identical twins who plan to retire this summer after long careers. We’ll call them Dave and Ron. They have worked for different employers and have accumulated retirement benefits worth the same amount in dollars, but the benefits won’t be paid out the same way.

Dave can count on a traditional pension, paying $4,000 a month for the rest of his life. Ron, on the other hand, will receive his benefits in a lump sum that he must manage himself. Ron has a lot of choices, but all have consequences. For example, he could put the money into a conservative bond portfolio and by spending the interest and drawing down the principal he could also spend $4,000 a month. If Ron does that, though, he can expect to run out of money sometime around the age of 85, which the actuarial tables tell him he has a 30 percent chance of reaching. Or he could draw down only $3,000 a month. He wouldn’t have as much to live on each month, but his money should last until he reached 100.

Who is likely to be happier right now? Dave or Ron?

If this question seems a no-brainer, welcome to the club. Nearly everyone seems to prefer the certainty of Dave’s pension to Ron’s complex options.

But here’s the rub: Although people like Dave who have them tend to love them, old-fashioned “defined benefit” pensions are a vanishing breed. On the other hand, people like Ron — with defined-contribution plans like 401(k)s — can transform their uncertainty into a guaranteed monthly income stream that mirrors the payouts of a traditional pension plan. They can do so by buying an annuity — but when offered the chance, nearly everyone declines.

Economists call this the “annuity puzzle.” Using standard assumptions, economists have shown that buyers of annuities are assured more annual income for the rest of their lives, compared with people who self-manage their portfolios. One reason is that those who buy annuities and die early end up subsidizing those who die later.

So, why don’t more people buy annuities with their 401(k) dollars?

Here’s one part of the answer: Some people think that buying an annuity is in some way a bad deal for their heirs. But that need not be true. First of all, a retiree can decide to set aside some portion of a retirement nest egg for bequests, either immediately or at a later date. Second, if a retiree chooses to manage his or her own money, the heirs may face the following possibilities: Either they get financially “lucky” and the parent dies young, leaving a bequest, or they are financially “unlucky,” meaning that the parent lives a long life, and the heirs take on the burden of support. If you have aging parents, you might ask yourself how much you’d be willing to pay to insure that you will never have to figure out how to explain to your spouse, or whomever you may be living with, that your mother is moving in.

There are other explanations for the unpopularity of annuities, but I think two are especially important. The first is that buying one can be scary and complicated. Workers have become accustomed to having their employers narrow their set of choices to a manageable few, whether in their 401(k) plans or in their choice of health and life insurance providers. By contrast, very few 401(k)’s offer a specific annuity option that has been blessed by the company’s human resources department. Shopping for an annuity with hundreds of thousands of dollars at stake can be daunting, even for an economist.

The second problem is more psychological. Rather than viewing an annuity as providing insurance in the event that one lives past 85 or 90, most people seem to consider buying an annuity as a gamble, in which one has to live a certain number of years just to break even. But, as the example of Dave and Ron shows, it’s is the decision to self-manage your retirement wealth that is the risky one.

The most complex and unknowable part of that risk is in predicting how long you will live. Even if there are no medical advances in the coming years, according to the Social Security Administration, a man turning 65 now has almost a 20 percent chance of living to 90, and a woman at this age has nearly a one-third chance. This means that a husband who retires when his wife is 65 ought to include in his plans a one-third chance that his wife will live for 25 more years. (A “joint and survivor” annuity that pays until both members of a couple die is the only way I know for those who are not wealthy to confidently solve this problem.)

An annuity can also help people with another important decision: when to retire. It’s hard to have any idea of how much money is enough to finance an appropriate lifestyle in retirement. But if a lump sum is translated into a monthly income, it’s much easier to determine whether you have enough put away to afford to stop working. If you decide, for example, that you can get by on 70 percent of preretirement income, you can just keep working until you have accrued that level of benefits.

IN the absence of annuities, there is reason to worry that many workers are having trouble with this decision. Over the last 60 years, the Bureau of Labor Statistics reports that the average age at which Americans retire has trended downward by more than five years, from 66.9 to 61.6. Of course, there is nothing wrong with choosing to retire a bit earlier, but over the same period, live expectancy has risen by four years and will likely continue to climb, meaning that retirees have to fund at least an additional nine years of retirement. Those who manage their own retirement assets can only hope that they have saved enough.

Annuities may make some of these issues easier to solve, but few Americans actually choose to buy them. Whether the cause is a possibly rational fear of the viability of insurance companies, or misconceptions about whether annuities increase rather than decrease risk, the market hasn’t figured out how to sell these products successfully. Might there be a role for government? Tune in next time for some thoughts on that question.

Richard H. Thaler is a professor of economics and behavioral science at the Booth School of Business at the University of Chicago. He is also an academic adviser to the Allianz Global Investors Center for Behavioral Finance, a part of Allianz, which sells financial products including annuities. The company was not consulted for this column.

July 18 Update: To the Editor:

Re “Annuities and the Puzzle of Income” (Economic View, June 5), in which Richard H. Thaler described some advantages of buying annuities:

Annuities are superficially attractive, but they have important flaws the column did not discuss. People don’t tend to buy diversified sets of annuities, and because they are issued by inherently leveraged financial intermediaries, there can be material credit risks that are hard to assess over the 20- to- 40-year horizon of their payouts.

Annuity providers also incur sales charges and operating expenses, and need capital and a cushion of economic earnings. Those costs may not be incurred by someone making their own investments, or doing so through lower-cost vehicles.

Finally, inflation is an even more important consideration. Not discussing it is like playing “Hamlet” without the prince. In 30 years, the level of consumer prices in the United States might double or sextuple. The first would be painful, and the second ruinous, to someone who relied only on a fixed annuity.

The writer is the portfolio manager at Arbiter Partners, a hedge fund.

Editor:A devastating critique of annuities: Credit risk, high costs, and inflation risk.  Right now might be the WORST TIME in the past 100 years to buy an annuity. Be careful out there in your search for returns.

For those who gave a good answer, claim your prize. This link will disappear in a day and the prize will go into the Value Vault (under spins). Remember just email me at aldridge56@aol.com with VALUE VAULT in the subject line (don’t write anything else). The value vault has over 200 books, videos, case studies and just plain great material for learning about investing and business analysis. Reward given ($$$) to someone who can find a better resource on the web.