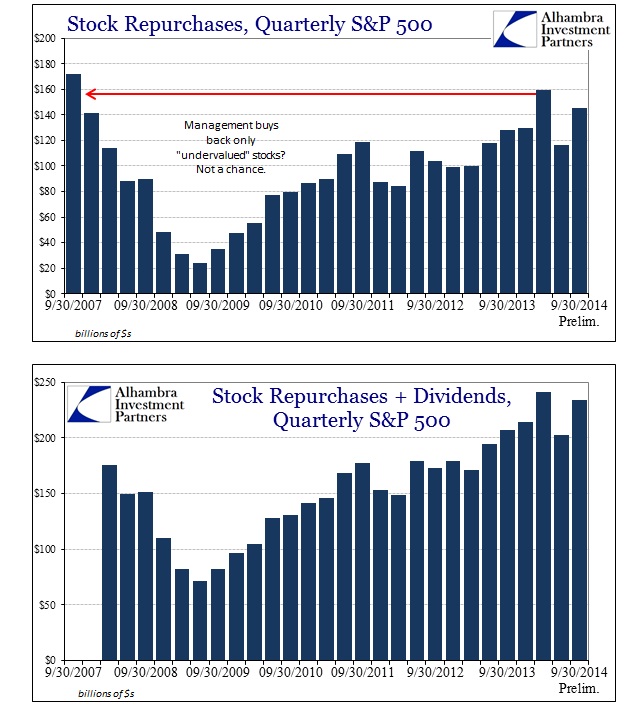 The Acquirer’s Multiple Ch 4 in DEEP VALUE  is where we left off in discussing Chapter 4.

Imagine diligently watching those stocks each day as they do worse than the market average over the course of many months or even years….The magic formula portfolio fared poorly relative to the market average in five out of every 12 months tested. For full-year period…failed to beat the market average once every four years. Joel Greenblatt discusses the role that loss aversion plays in deterring investors from following his ‘magic formula’. (Montier)

Greenblatt reinterpreted Buffett’s return on equity capital measure as RETURN ON CAPITAL, which he construed as the ratio of pre-tax operating earnings (earnings before interest and taxes, or EBIT or EBITDA-MCX or operating earnings that are sustainable) to tangible capital employed in the business (Net Working Capital + Net Fixed Assets) defined as:

The use of EBIT makes the return on capital ratio comparable across different capital structures. EBIT makes an apples-to-apples comparison possible.

For tangible capital Greenblatt uses NWC + Net Fixed Assets rather than total assets to determine the amount of capital each company actually requires to conduct its business.

The higher the return on capital ratio, the more wonderful the company.

To determine a fair price, Greenblatt uses earnings yield, which he defines as follows:

EV gives a more full picture of the actual price an acquirer must pay than market capitalization alone.  EBIT is agnostic to capital structure so we can compare companies on a like-for-like basis.

The higher operating earnings are in relation to enterprise value, the higher the earning yield, and the better the value.

The EV to EBITDA ratio is useless without a discussion on asset lives, capital intensity, technological progress or revenue recognition.

EBITDA, or any of its derivatives (EBDIT, EBITDAR, etc.) is simply a crude measure of gross cash flow.

The gross cash flow margin is simply a measure of the capital intensity of the business.   A manufacturing business will have a significantly higher gross cash margin than, say, a retailer, because it needs to pay for the capital (via in the accounting sense the depreciation charge) of all its plant and equipment which consumes more of it than a superstore.

What matters is not gross cash flow but net of free cash flow, which is the amount of cash available after reinvestment.

In the heyday of the technology bubble, the EV to EBITDA ratio was a favorite among telecom analysts.   Sadly, as new entrants came into the system and pushed up the price of the UMTS licenses (the third generation of mobile networks) to insane levels, the cost of replacement went sky-rocketing; expected free cash flow plummeted, and the telecom shares got more and more ‘attractive’ on an EBITDA basis, which could not capture any of this.   Eventually, some went bankrupt, some had to undergo a debt rescheduling exercise or issue new capital, and all saw their share price collapse.

James Murray Wells, a 21-year-old law student in Bristol, UK, needed a pair of glasses, and was faced with a bill of 150 stg.   He found that the manufacturing cost off standard spectacles (frame and glasses) was less than 10 stg.   This prompted Mr. Murray Wells to set up an Internet-based company to challenge what he claimed was a lack of price competition among the four major high street opticians in England.  Three months into his venture, he was selling hundreds of pairs for as little as 15 stg to apparently delighted customers.

The replacement value of the asset, ‘making spectacles and selling them’ is rather low.   A 21-year old student with no expertise in the field is apparently able to replicate it from his student room, with a few thousand pounds borrowed from his father.   On the other hand, the market value is enormous because, as previously discussed, it equals the net present value of free cash flow discounted to infinity.

The market value is a direct function of the economic profitability of the asset in question and, in this example with a cost of goods sold at 10 and sales at $150, it is plain that economic value added is truly staggering.   Making spectacles and selling them has a high ROIC, and an equally impressive asset multiple—the ratio of market value to the replacement value of invested capital.

If the entrepreneur is successful in his venture, he will collapse the marginal return on capital invested of the industry by accepting a lower margin than his competitors.   The entrepreneur made an arbitrage between the market value of existing capacity and the replacement value of new capacity, which he found cheaper to create.

Investors in incumbent firms my find out that they have paid too much for the economic value of their asset in the belief that a very high economic return on capital invested was sustainable.   Investors who ignore the workings of the capital cycle, the ultimate driver of share prices, do so to their disadvantage.

Investment should just be a replication of the process of arbitrage between market value and replacement value. Good stock pickers are brilliant strategy analysts.   They understand the business case for the company. (TATOO that to your forehead!)

Why is the EV so good at identifying undervalued stocks?

What drives the returns of the magic formula? What Metric?  What does this mean for us as Deep Value Investors?

Assuming you read the entire chapter, what two main points about investing did you learn?  Anything surprise you?

What Has Worked in Investing by Tweedy Browne   Why do low price-to-book, low price to cash flows, etc tend to generate higher returns than a market average?  What is the principle behind the returns?  Also, note the Richard Thaler link below for a hint.

When an investor turns to the research on regression to the mean and investors overreacting to poor company performance/bad news in Richard Thaler research, he or she sees that prices of the winner and loser portfolios take three-to-seven years to revert.  See also The New Finance: The Case Against Efficient Markets by Robert A. Haugen and Inefficient Markets by Andrei Schleifer.

Next, we will focus on Mean Reversion and ROIC.

Death Taxes and Reversion To The Mean (Mauboussin)

Dale Wettlaufer on ROIC and MROIC  a series of Fool.com articles

EconomicModel of DFC_ROIC The author uses NOPAT (after-taxes). I placed this here for those who wanted to see how others determine value.

We will review the second half of the chapter next.

This entry was posted in Free Courses, Valuation Techniques and tagged Chapter 4, EBIT, EV, MROIC, Reversion to the Mean, ROIC. Bookmark the permalink.

4 responses to “Questions on Chapter 4”