An Industry in Disruption, AUTOS. Notes from a Capital Junkie. Tit-for-Tat Analysis 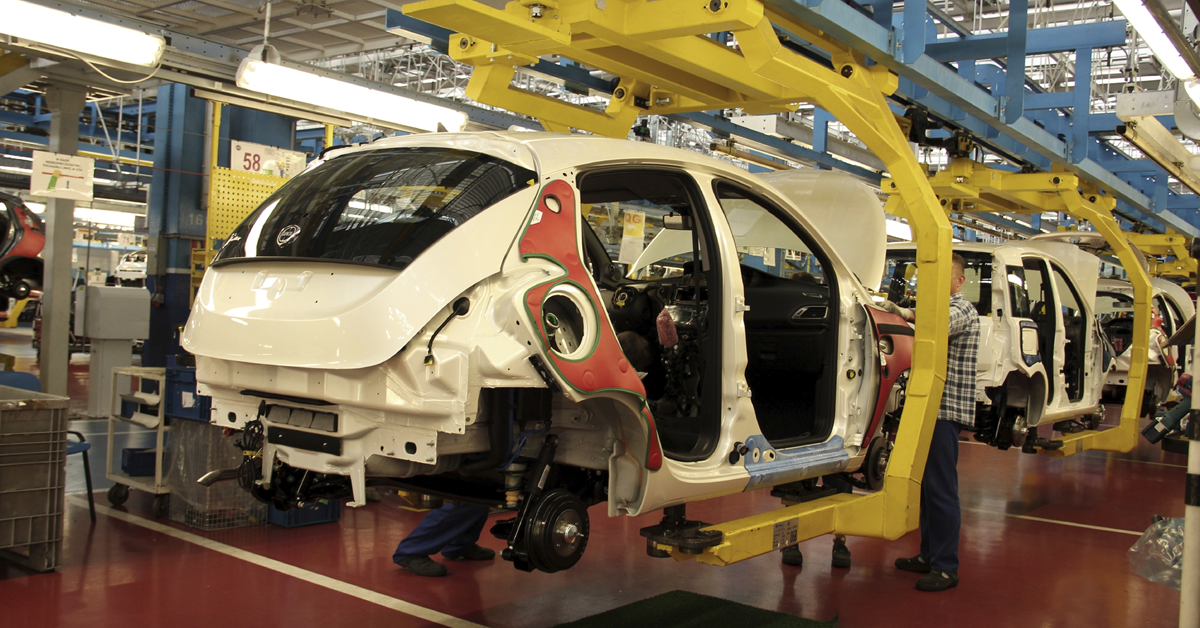 Read an excellent analysis of the auto industry: SM_Fire_investor_presentation

This time, the Fiat Chrysler CEO went a step further than usual by declaring that the latest plan for the company is essentially a one-way bet on cheap gas. Production of compact cars will end to free up production capacity for high-margin, low-mileage Jeeps and RAM trucks.

This, combined with Fiat’s more or less complete lack of a fuel economy or electrification strategy beyond buying emissions credits from other manufacturers “foolish” enough to produce electric and hybrid “compliance cars,” is quickly making Marchionne, if not an industry joke, then certainly yesterday’s man.

At least, that is what people are saying. I have an alternate hypothesis.
The Auto Industry Is Not Heading to a Good Place (The author, in my opinion, has the correct thesis.  Ride sharing, Uber, Tesla, more complex electronics mean less demand and more investment to run in place). 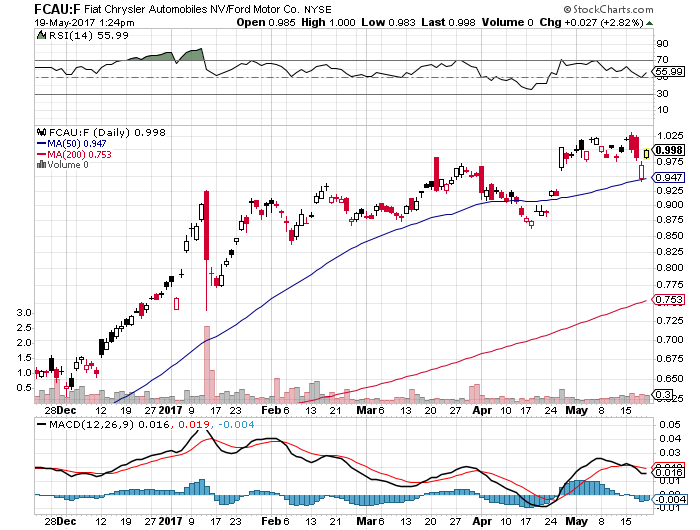 Fiat vs. Ford above

Fiat (FCAU) has done slightly better than GM and much better than Ford (F).  However, the auto industry is in a bad place that will worsen.

The context is frightening. Global fuel economy and emissions regulations are becoming so strict that it is possible to meet them only with partial or full electrification of the automobile. And the existing automobile production system, based primarily on stamping sheet metal and amortizing heartbreaking development costs and capital expenditures over millions of units, is incredibly capital inefficient.

What’s more, the industry’s move towards electric vehicles represents a significant challenge to the traditional strategic landscape an automaker faces. An electric vehicle has drastically fewer moving parts than an internal combustion vehicle and is, by design, far more modular, meaning that barriers to new entrants are significantly lower.

Electric vehicles are also far more uniform in their driving dynamics, because there is little scope for refining an electric motor with one moving part. Swathes of engineering and marketing investments become irrelevant. And both ride-sharing enterprises and developments in automation seem increasingly likely to grow beyond niche markets into something properly disruptive to the car ownership business model.

Last year, Marchionne presented a uniquely critical slide deck about the way the auto industry destroys capital. His argument was that, unless the industry consolidates and stops duplicating engineering costs (e.g., every car manufacturer has its own separately developed but fundamentally identical 2.0L 4-cylinder petrol engine), then the market will eventually force its hand, having gotten sick of miserly returns on billions in investments.

The industry response to this slide deck was more or less complete agreement, with the caveat that competitors would not have to outlast the market so much as merely outlast Fiat Chrysler. Marchionne then pursued an odd and ultimately unsuccessful merger with GM’s Mary Barra, who confidently rejected Fiat Chrysler’s plan, noting, “We are merging with ourselves.” (This presumably referred to GM’s decades-long quest to bring rationality to its stable of brands.)
GM is not only merging with itself, it is also “disrupting” itself — as evidenced by their recently announced Chevy Bolt long-range, affordable electric car. The company claimed the Bolt was designed to be the perfect car for ride-sharing apps. Just before launching the Bolt, GM announced a $500 million investment into Lyft, the main competitor to Uber.

This no doubt surprised competitors who have been making efforts to disabuse markets and investors of the notion that they would become mere providers of hardware to ride-sharing companies like Uber or autonomous car suppliers like Google. Dieter Zetsche, CEO of Daimler, remarked “We do not plan to become the Foxconn of Apple.”

Manufacturers Are Going to Have to Invest

In fact, the bosses of Daimler, BMW, and Audi went looking behind the couch for some spare change to buy joint ownership of Nokia’s (remember them?) mapping service HERE, and did so primarily to stop their rival bidder – Uber – from buying it. High-resolution maps are crucial to autonomous cars; Uber’s CEO has said that, if Tesla can make good on their promise of a long-range, autonomous electric car, he would buy “all” of them.

The Germans are thus investing billions into electric vehicles made out of carbon fiber that pilot themselves using super-high resolution maps, all the while fighting back against Apple and Google’s requests for access to their cars’ infotainment systems. Their global leadership of the auto industry will have to be pried from their cold, dead hands.

Meanwhile, all the difficult bits of the Chevy Bolt (“custom-built” for Lyft, remember) are built in large part by Korea’s LG. One wonders why Lyft (or Uber) would not simply buy the next model directly from LG? I guess even if there is no Foxconn for cars yet, there may be soon. Remember, electric cars are far more modular than internal combustion cars.
Marchionne Says “No Thanks”

Or, if not him, then certainly the Agnelli family. A sort of Italian royalty who control Fiat Chrysler (and Marchionne) via their ownership of the Exor holding company, the Agnellis have been showing signs that they are tiring of the endless drama surrounding Fiat and the auto industry in general. They bought a stake in The Economist in 2015 in a move towards media, but the recent de-conglomeration of Fiat has been noticeable in other ways.

First, in 2013, Fiat’s industrial division was de-merged and combined with CNH Global (maker of tractors under the Case IH and New Holland brands) into a separate company, CNH Industrial. Most recently, Ferrari, the jewel in the Fiat Chrysler stable of brands, was floated in New York.

Speaking of Ferrari, Marchionne took advantage of a recent dip in the fortunes of Ferrari’s eponymous Formula 1 team to unceremoniously eject Luca di Montezemolo as president and chairman of Ferrari and replace him with . . . himself. It should be noted that di Montezemolo was appointed by Gianni Agnelli himself after the death of the founder, Enzo Ferrari, and is a bona fide business superstar in Italy. Marchionne has been playing an increasingly active part in the politics of Formula 1 recently, something that will no doubt continue to make for a less stressful (but still stimulating) retirement when Marchionne puts on his famous blue sweater for the last time in 2018.

But for now, Marchionne has seen the future. Large subcontractors will produce partially or fully autonomous electric vehicles, with the sole differences between them being brand value and design. The car makers that survive may well simply produce cars for Google (Ford recently signed an agreement along these lines), Apple, or Uber. Some, like BMW or Mercedes-Benz, may survive because of their brand and design qualities. Fiat Chrysler does not have this.

Marchionne doesn’t care about expensive gas or electric vehicles because his plan is simple:

Sell the profitable Jeep/RAM brands to another conglomerate that does not compete in these segments (for example, Hyundai KIA).
Sell the unprofitable Fiat to anyone who will take it. Perhaps synergies in the lucrative European light commercial vehicle segment will attract another European maker, such as PSA Peugeot Citroën, whose CEO, Carlos Tavares, has ambitions that were thwarted at his previous employer, Renault.
Sell Alfa Romeo and Maserati to someone who could use a strong brand. Perhaps Volkswagen will finally get hold of its prized Italian trophy if they can sort out their global legal woes.

Retire to play with his giant Formula 1 Scalextric set.
Marchionne has been mocked for his firms’ strategy, which has been attributed to hubris. But perhaps he is the one seeing clearest of all.
Is the best way to deal with disruption simply to step out of the way?
If you liked this post, don’t forget to subscribe to the Enterprising Investor.

Question: Who wins when–in a perfectly competitive market–competitors fight each other?    Prize awarded for best answer.

14 responses to “An Industry in Disruption, AUTOS. Notes from a Capital Junkie. Tit-for-Tat Analysis”