A Discussion about Whether Austrian Economists and Value Investors Agree on How Intrinsic Value is Determined.

CSInvesting: Understand that Intrinsic Value is SUBJECTIVELY determined while prices are set by the marginal buyer and seller.  All an investor does is compare price to value.

Essentially, value investing focuses on the comparison of a good’s intrinsic value and its market price and recommends investing in it as long as the asset’s value exceeds its price given a margin of safety.

End-the-Myth-On-Value-Investing’s-Incompatibility-with-Austrian-Economics-by-Olbrich-et-al   I would skim this article.

An Austrian economist who is also a value investor, Chris Leithner rebuts the above statement: “Value investors’ conception and assessment of value are congruent with the Austrian School’s.”

“A value investor” measures value by one of two methods:

The Hinge between the theory of Value and the Practice of Value Investing.

John Burr Williams in his The Theory of Investment Value, 1938 wrote, “With bonds, as with stocks, prices are determined by marginal opinion…..Concerning the right and proper interest rate (discount rate), however, opinions can easily differ, and differ widely….Hence those who believe in a low rate will consent to pay high prices for bonds…while those who believe in a high rate will insist on low prices…Thus investors will be bullish or bearish on bonds according to whether they believe low or high interest rates to be suitable under prevailing economic conditions.   As a result, the actual price of bonds….will thus be only an expression of opinion, not a statement of fact.  Today’s opinion will make today’s rate; tomorrow’ opinion, tomorrow’s rate; tomorrow’s opinion, tomorrow’s rate; and seldom if ever will any rate be exactly right as proved by the event.

How then does Warren Buffett define and measure value? In his 1994 Letter to Shareholders he writes:

We (Charlie Munger and I) define intrinsic value as the discounted value of the cash that can be taken out of a business during its remaining life.  Anyone’s calculation intrinsic value necessarily comes up with a highly subjective figure that will change both as estimates of future cash flows are revised and as interest rates move.  Despite its fuzziness, however, intrinsic value is all-important and is the only logical way to evaluate the relative attractiveness of investments and businesses.

Graham, by the way, would agree with the definition of intrinsic value but he would doubt whether investors could usefully apply it. (Ben Graham, 1939)  “The rub,” writes James Grant in the 6th Edition of Security Analysis (2009), page 18, “was that, in order to apply Williams’s method, one needed to make some very large assumptions about the future course of interest rates, the growth of profit, and the terminal value of the shares when growth stops.”

The entire article by Chris Leithner is an important read: Value Investing and Austrian Economics Leithner

Certainty is not certaintude–Oliver Wendell Holmes

The video below–though choppy in the first few minutes–is worth hearing about the psychology of market bubbles.   The interviewer of Bob Moriarty is ignorant of basic economics (Can prices EVER go below the cost pf producing a useful/needed product? Yes or No), but you can follow the discussion.  Note the pushback of the interviewer who is also an owner of bitcoins to Moriarty’s questions.  The psychology is fascinating–the will to believe and suspend judgment. 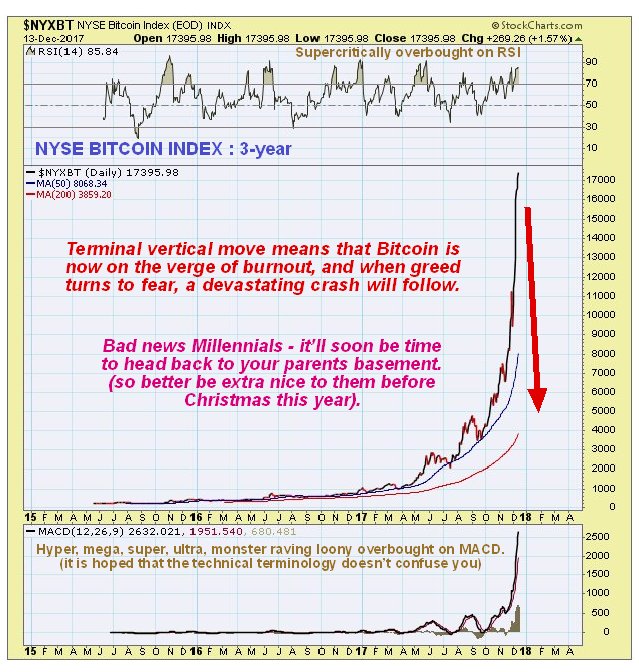 Bitcoin is up more than 2,000 percent in the last year and now trades above $17,000. Bitcoin futures trading launched this week on the Cboe exchange, gaining more than 19 percent Monday in the first full day of trading.
There are now 1,358 cryptocurrencies in existence, according to CoinMarketCap. Other digital currencies such as ethereum are better designed for programmable “smart contracts” and have quicker transaction times versus bitcoin.

Bitcoin’s scalability is another issue. There is technical limitation on how many transactions that can be processed at the same time. Partly as a result, widespread use of the cryptotcurrency for payments has not occurred yet.
So cryptocurrency investors must honestly ask themselves, is bitcoin really changing the word through blockchain technology innovation or is it mainly speculative asset? It’s the latter.

Bitcoin “is a speculative mania. It’s Beanie Babies,” he said at a Schechter event in Detroit, Michigan Wednesday, referring to the toy fad craze during the 1990s.
DoubleLine Capital CEO Jeffrey Gundlach criticized the lack of analytical rigor in the recent “nice round number” $1,000,000 price targets for the bitcoin, which is reminiscent of previous speculative blow-offs.

“I have no interest in this type of maniacal type of trading market,” he said on CNBC Wednesday.

“There is the old story about the market craze in sardine trading when the sardines disappeared from their traditional waters in Monterey, California. The commodity traders bid them up and the price of a can of sardines soared. One day a buyer decided to treat himself to an expensive meal and actually opened a can and started eating. He immediately became ill and told the seller the sardines were no good. The seller said, ‘You don’t understand. These are not eating sardines, they are trading sardines.’

Like sardine traders, many financial-market participants are attracted to speculation, never bothering to taste the sardines they are trading. … trading in and of itself can be exciting and, as long as the market is rising, lucrative. But essentially it is speculating, not investing. You may find a buyer at a higher price—a greater fool—or you may not, in which case you yourself are the greater fool.”