Reality is just a crutch for people who can’t cope with drugs.–Robin Williams

I attribute my success to seeing the world as it is, not the way I would like it to be–Warren Buffett (attribution by a friend)

In the VALUE VAULT I split up the videos into two major sections—the VALUE VAULT does NOT include the 2010 Greenwald Value Investing Class Lectures. Those 21 videos (1 semester) are in a separate folder. If you want the key to THAT folder then email aldridge56@aol.com and ask for 2010 Videos. When someone new asks for keys to the VALUE VAULT, I will automatically send keys for all separate folders. The vault will become better organized, manageable, and easier to access. The next step will be to categorize this blog.

I do not recommend this book since I have not read it, but want you to be aware of this video on Moats and the book about Berkshire Hathaway Businesses Competitive Advantages http://www.youtube.com/watch?v=kizM8UaqF_4

If anyone reads and likes the book, please post your comments. Thanks.

The author of the Moat book lectures on valuation models: http://www.youtube.com/watch?v=tp3FLQxcbws&feature=related

Valuation in a nutshell: http://www.youtube.com/watch?v=rSNNBrt-XfE&feature=related.

Of course, perfect in theory and difficult-to-impossible in practice. The point is to remind us why we are studying strategy—to understand the competitive advantages or lack thereof in the companies we hope to value.

Would anyone like to comment on what you learned? What numbers jumped out at you from Coors’ operations as it expanded nationally?  If you saw those numbers of competitors’ market share, what would you do as the management? What is the structure of the industry now and who has the dominant Economies of Scale or “EOS”?  What did management lose sight of? 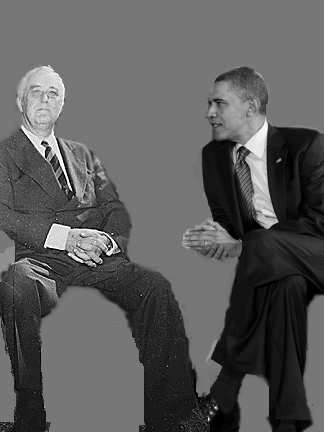 Comparing the Great Depression to the Great Recession

Interesting parallels to FDR and Obama. The author doesn’t mention that our fractional reserve banking system is inherently unsound. The government policies (actions of the Federal Reserve) exacerbate the boom and resulting bust while the government actions to alleviate the downturn simply prolong and deepen the agony. The mal-investment has to clear and the structure of production has to have time to adjust to changed time preferences of the consumer.

Causation. The main causes of both crises lie in actions of the federal government. In the case of the Great Depression, the Federal Reserve, after keeping interest rates artificially low in the 1920s, raised interest rates in 1929 to halt the resulting boom. That helped choke off investment.

The seeds of the Great Recession were planted when the government in the 1990s began pushing homeownership, even for uncreditworthy people, with a vengeance. Mortgage-backed securities built on dubious mortgage loans became “toxic” when the housing market took a downturn, and many American banks verged on collapse. The government’s urgent desire to bail out various banks and corporations created uncertainty and instability, and this may have widened the recession.

Massive federal spending. Presidents Roosevelt and Obama responded similarly to the crises. They talked about balancing the federal budget, but instead resorted to massive spending. Earlier presidents, like Cleveland and Harding, cut spending when the nation was threatened with economic hardship. Hoover was the transition president, running deficits with record spending on public works, the first federal welfare program, and the first large-scale federal farm program. The results were budget deficits and 25 percent unemployment.

President Roosevelt became Hoover on steroids. FDR and his advisers, despite some early moves to cut spending and control the deficit that Hoover left behind, decided that ever-larger federal spending would trigger economic expansion and pull the country out of its economic slump. Thus Roosevelt began the Agricultural Adjustment Act (AAA), which paid farmers not to produce, and then expanded Hoover’s Reconstruction Finance Corporation, which provided bailout money to large banks and corporations. He also expanded spending on public works and targeted large subsidies to various special interests.

President Obama, who often cites FDR, followed his example of targeting spending to interest groups. He signed into law a $787 billion stimulus package that sent tax dollars to various cities and voting groups across the nation. He later supported an expensive “jobs bill” that would send money into key congressional districts. The President also campaigned for a cap-and-trade bill and universal health coverage, both of which promised to increase the federal debt substantially. In fact, the increase in federal debt under Obama and Roosevelt is similar. The national debt more than doubled in Roosevelt’s first two terms, and it is projected to double again in eight to ten years.

Spending fails. After the large increases in federal spending under Roosevelt and Obama, unemployment remained high. In the 1930s unemployment fluctuated, but recovery never occurred. In April 1939, toward the end of Roosevelt’s second term, unemployment was almost 21 percent. Treasury Secretary Henry Morgenthau complained, “We are spending more than we have ever spent before and it does not work.” Nonetheless, almost all of FDR’s programs continued—usually with annual budget increases.

When Obama took office unemployment was at 8 percent, and in the next year it steadily increased to over 10 percent before falling back just under that mark. He and his advisers were puzzled that large spending increases did not slash unemployment, and he argued that his spending was saving jobs that would otherwise have been lost.

Critics of Roosevelt and Obama insisted that it was impossible to spend our way out of a recession. During the New Deal, economics writer Henry Hazlitt observed that public-works spending destroyed as many jobs as it created. “Every dollar of government spending must be raised through a dollar of taxation,” Hazlitt emphasized. If the Works Progress Administration builds a $10 million bridge, for example, “the bridge has to be paid for out of taxes. . . . Therefore for every public job created by the bridge project a private job has been destroyed somewhere else.”

Tax rates raised. During the Great Depression Roosevelt raised both income and excise taxes. In 1935, with FDR’s push, the top marginal tax rate hit 79 percent. Few paid that rate, but thousands of Americans were in the 50-percent bracket. Entrepreneurs had to hand over more than half of any income above a certain level. Facing disincentives to make capital investments, many entrepreneurs used their wealth cautiously—investing in tax-exempt bonds, art collections, and foreign banks. Little wealth went into creating jobs, so high unemployment persisted. During World War II FDR raised taxes further, to 94 percent on all income over $200,000.

Most of the tax hikes under Obama are planned for the future. Thus far we have seen proposed tax hikes on products such as cigarettes, liquor, plane tickets, and soft drinks. He wants the tax cuts enacted under President Bush to expire. That will mean a spike in the capital gains tax, the income tax, and the estate tax. As FDR showed, tax hikes eventually follow large spending increases.

Scapegoats. The sequence of massive federal spending followed by a lack of recovery plus tax hikes is poison for a politician. Therefore Roosevelt sought scapegoats to explain his failure. Wall Street bankers were his favorites. He called them “economic royalists” and blamed them for causing the Great Depression. He also blamed America’s top businessmen for instigating a “capital strike”—they were refusing to invest in order to make him look bad. FDR then launched IRS investigations of key Republicans and used the newspapers to encourage hostility toward these targets.

Obama has followed FDR’s playbook of attacking Wall Street bankers and various corporate leaders. He condemns the raises these bankers sometimes receive and the profits earned by some large oil companies and health insurance companies.

Such emphasis on “class warfare” may be an inevitable part of redistributing wealth from one group to another. Perhaps Roosevelt and Obama believed that by increasing envy and resentment toward some Americans, they could capture the votes of larger groups of Americans and thereby win reelection (in FDR’s case there is evidence of this). True, this strategy guarantees that many wealthy Americans will attack any president who uses class warfare, but the campaign for redistribution will always supply large amounts of money to subsidize favored groups.

When Roosevelt was reelected in 1936 Senator Carter Glass, Virginia Democrat, admitted, “The 1936 elections would have been much closer had my party not had a 4 billion 800 million dollar relief bill as campaign fodder.”

Obama may be hoping his “stimulus” package and his health insurance bill will generate similarly large support among Americans receiving federal benefits and that these voters will go to the polls to overwhelm those who are paying the bills.

The FAA has released the audio tapes and transcripts of the radio communications between Flight 1549, the US Airways jet that crash-landed in the Hudson River on Jan. 15, 2009 and the various air traffic controllers in the area on the afternoon of the accident.

Lesson for investors: Focus on what YOU can control in an often uncertain and random world. http://www.youtube.com/watch?v=YAD5xBgPTWQ&feature=related

I Wanna Go Back (Eddie Money on Sax)