A Contrarian’s Dream (CEF); The Buffetts’ Thoughts on Money

Another conviction forced upon my mind, by the examination of long periods of history, was the exceedingly small part played by conscious thought in moulding the fate of men. At the moment of action the human being almost invariably obeys an instinct, like an animal; only after action has ceased does he reflect.” –Brooks Adams in The Law of Civilization and Decay (1897)

Perhaps the only reliable contrary thought one dares hold when monetary innovations are presented is simply one of doubt. Old-timers have confidence only in gold, whereas the younger and “newer” economists are unafraid to experiment with substitutes for what has been called our “barbaric metal.” A speaker contends that gold may be barbaric, “but it is no relic.”

A review of depressions reveals how in every cycle the crisis developed when money and credit became overextended. No answer to the monetary riddle is foreseeable so long as bankers, business-men and speculators act normally, which is that they will push for profits when, and as long as, there is capital gain to be made. They will leave the idealistic “distaste” for money and the power of money to the hippies.

The trained contrarian recognizes the periods of monetary over-extension and guards against the inevitable “corrections.” He need not understand the riddle of money to avoid its perils.  –Humphrey B. Neill, The Ruminator

Buy CEF or buying gold and silver bullion at a discount 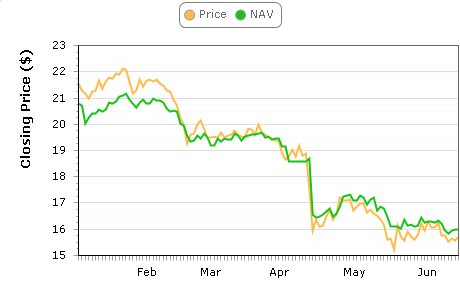 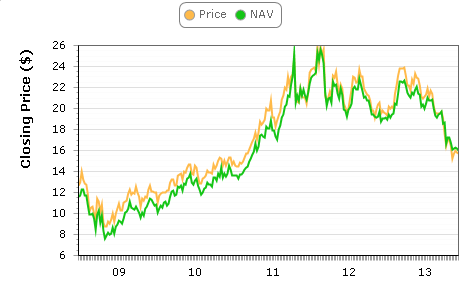 CEF is a closed-end fund that holds gold and silver bullion--currently trading at a 1.5% to 2% discount. Back in 2011, CEF traded at a 6% premium. The present discount is a function of HISTORICAL and UNPRECEDENTED bearishness by small speculators who are currently net short! If ever there was contrarian signal, this is one. Oh, I forgot one, Noureil Roubini, an economist, says that gold will go to $1,000 because the world is in recovery. See below: 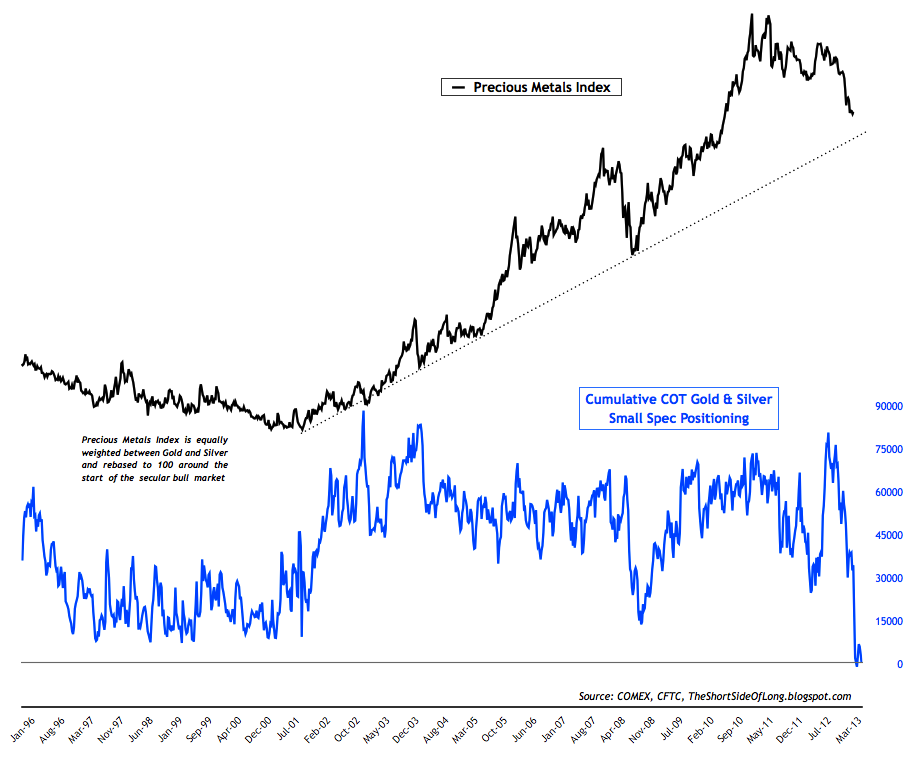 Commercials at a thirteen year high in bullish positioning

In recent years, commercial gold futures traders have been continuously net short ever since late 2001, and so the game consists of evaluating their comparative net short position relative to recent readings.

The reason for this bias to the short side is that a lot of the commercial gold traders are gold producers, who sell their future production ahead of time in the futures markets, and who thus are short. Commercial traders of silver futures have been continuously net short to varying degrees going all the way back to the start of modern COT Report data back in 1986.

In the chart above, the current reading is the commercials’ lowest net short position (as a percentage of total open interest) since 2001, which was when gold prices were just starting a multi-year uptrend from below $300/oz. The message here is that commercial traders as a group are convinced that gold prices are heading higher. They usually get proven right, eventually, although sometimes we have to wait around longer than we might wish for “eventually” to get here.

http://www.cefconnect.com/Details/Summary.aspx?ticker=CEF. Now, you may not wish to own gold as a way to hold/store a portion of your savings, but if you are looking for a way to buy bullion, this might be an intelligent way. This writer’s understanding is that  gold is money (all else is credit–J.P. Morgan)–if it wasn’t, then gold’s U.S. dollar price would probably be 50% to 95% lower. Gold is not a currency due to our fiat currency laws (coercion), and gold is NOT an investment. Gold does not create wealth, but it represents wealth/savings. Finally, extreme bearishness may be a contrarian buy signal, but–as in all things pertaining to human action–prices may decline further for a while. No one knows future prices definitively.

However, with high bearishness among small specs in the leveraged paper market with strong commercial traders on the other side of the trade after a two-year decline of 30% to 50% in gold and silver prices, which side do you want to be on?  The theory of contrary opinion aims at avoiding Crowd opinions. That is a broad generality but the reason for avoiding the crowd in most matters is that the crowd is often wrong. A crowd is swayed by emotion and fear rather than by ruminating and reasoning.

Now, why own some gold? Gold is non-printed, non-government created money. If you believe that our current fiat currency/debt laden system is sustainable or that the Fed can “taper” and “exit,” with precision, perfect foresight, and without consequences then just hold paper dollars. If you do own CEF, pray that bullion declines in price because then the rest of your portfolio is probably prospering. Gold is not an investment but simply another form of money.

Warren and Howard Buffett’s Thoughts on Money and Gold

Now where are we today?

View the below videos for a discussion of some economic issues concerning massive debts and zero interest rate policy. The first video is 18 minutes while the next video is 55 minutes.

Arguments given for central planning interventionism and going off the “gold standard” are the periods of booms and busts during the 19th century–forgetting that 1880 to 1913 showed consistent 4% to 5% REAL economic growth while nominal prices declined. Of course, with FRACTIONAL RESERVE banking (Ponzi finance) and regardless of bank notes fully redeemable in gold, there would be booms and busts because credit could be extended through fractional reserves beyond true savings. In other words, money is still being created out of thin air and the currency is not fully-backed 100% by gold (representing true savings). Governments do not enforce a depositor’s property rights by suspending redemption in times of crisis because governments are dependent upon banks for some of their financing. You have to fix all the underlying problems.

Finally, a massive disconnect in reality: Paul Krugman, a nobel-prize winning “economist” says that higher regulatory burdens have NO NEGATIVE effects upon small businesses. How can any one person be so arrogant and ignorant? All he has to do is ASK an entrepreneur/”small” business person DIRECTLY.  If anyone can prove Krugman’s point to me, I  will gladly send you $1 million in gold coins.  As Chicago Slim says, “This will not end well.”

8 responses to “A Contrarian’s Dream (CEF); The Buffetts’ Thoughts on Money”