Gold Discipline Melts Away or Case Study in Reading the News

This morning I read the news…Oh boy!  –The Beatles

(Editor: Read the following article and ask how YOU, as a reader or investor whether you have no opinion; are hyper bearish or hyper bullish gold or miners, benefit. Is there a particular BIAS? Finally, what is the main question you want answered? So what is the acquisition __________?  Prize awarded.

Gold Discipline Melts Away from Heard On The Street Column (WSJ April 17, 2014)

And they were doing do well. The intensifying battle of Osisko Mining is fast undoing gold miners’ work to restore credibility.

Wednesday Yamana Gold raised its offer to 8.15 Canadian dollars (U.S. $7.42) a share, this time roping in Agnico-Eagle Mines as a joint bidder, valuing Osisko at C$3.9 billion. Goldcorp raised its own bid to C$7.65 a share last week.

Takeover battles, with their risk of overpaying, are always unnerving for investors in the bidders. With gold miners thate is added concern: The sector has dropped about two-thirds since September 2011 as a history of overpriced deals an busted investment budgets caught up with it.

Miners have worked to address this, cutting costs and investment and, in many cases changing top management. Citigroup estinmates the average all-in cash cost per ounce, which includes things such as capital expenditure, fell by a fifth last year.

It remains more than $1,400 an ounce, though–still above today’s gold price of about $1,300. So this is no time to succumb to the old ways. Yet, even before Wed, both Yahmana and Goldcorp had made offers dilutive to their own value, ssays adam Graf at Cowen. That they are engaging in this now suggest talk of discipline is just that–or that their own project pipelines aren’t as robust as though.

Osisko’s stock now trades at C$7.94, and the break fee on the latest bid is worth 44 Canadian cents a share. To counter, Goldcorp would have to raise its bid roughly C$1, or 13%.

It should resist the temptation, but may not. One thing is clear. With the recently rediscovered discipline now apparently crumbling, it makes more sense to own junior gold miners, the potential targets, then their bigger rivals. –Liam Denning.

I will post my “answer” this weekend. Your thoughts?

Editor: Also, this article should spur you to do a valuation of Detour (DRGDF)–hint! hint! See: http://wp.me/p2OaYY-2m2 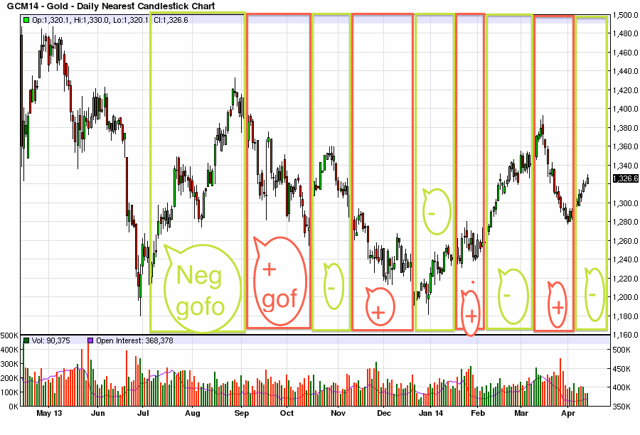 Note the extreme tightness for leasing gold. See: Gofo It will be interesting to see if gold can continue to decline in the face of bullion demand. Leasing rates are close to the most negative since mid-August 2013 when gold rallied to $1,400.

You can update your charts with the gold price vs. 1 month and 3 month GOFO rates.  Is this the canary in the coal mine for financial stress? Gofo Rates and Gold.  Low interest rates mean–all things being equal–gofo rates would be lower, But negative rates can ONLY mean two things: