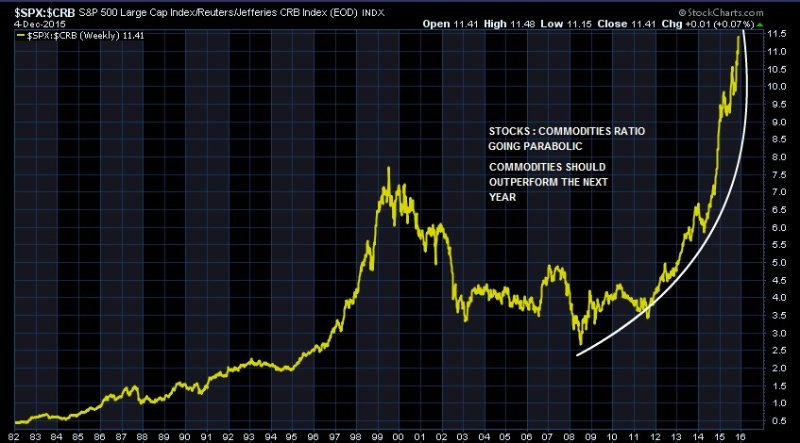 You can see the parabolic move to extremes. Extremes can become more extreme, but what can’t continue will end.  Commodities are at forty-year extremes. Prices will go low enough to shut down the high cost producers until the price settles near the lower part of the cost curve.  Supply is shutting down in zinc and uranium, for example.   Financial assets will not be bid up to infinity despite the price charts for AMZN or IBB.

The CRB index is printing 174 or not since 1975 have we seen such prices. Consider that Nixon severed the dollar’s link to gold in 1973 which caused nominal prices to rise.  The current bust is the flip-side of the massive mal-investment caused by ZIRP and easy credit over the past several years. the bust is the cleansing of the boom.

What will happen now?

“There is no means of avoiding the final collapse of a boom brought about by credit expansion. The alternative is only whether the crisis should come sooner as the result of voluntary abandonment of further credit expansion, or later as a final and total catastrophe of the currency system involved.” Ludvig V. Mises.

The Fed is presently heading down the inflation path, but it doesn’t have to stay on this path. A change of direction is still possible.

Now for the other Mises quote:

“This first stage of the inflationary process may last for many years. While it lasts, the prices of many goods and services are not yet adjusted to the altered money relation. There are still people in the country who have not yet become aware of the fact that they are confronted with a price revolution which will finally result in a considerable rise of all prices, although the extent of this rise will not be the same in the various commodities and services. These people still believe that prices one day will drop. Waiting for this day, they restrict their purchases and concomitantly increase their cash holdings. As long as such ideas are still held by public opinion, it is not yet too late for the government to abandon its inflationary policy.

But then, finally, the masses wake up. They become suddenly aware of the fact that inflation is a deliberate policy and will go on endlessly. A breakdown occurs. The crack-up boom appears. Everybody is anxious to swap his money against ‘real’ goods, no matter whether he needs them or not, no matter how much money he has to pay for them. Within a very short time, within a few weeks or even days, the things which were used as money are no longer used as media of exchange. They become scrap paper. Nobody wants to give away anything against them.”  –Mises

The gist is that if the inflation policy continues for long enough then a psychological tipping point will eventually be reached. At this tipping point the value of money will collapse as people rush to exchange whatever money they have for ‘real’ goods. Mises refers to this monetary collapse as the “crack-up boom”. Prior to this point being reached it will not be too late to abandon the inflation policy.

Today, the US is still immersed in the first stage of the inflationary process. If it continues along its current path then a “crack-up boom” will eventually occur, but there is no way of knowing — and “Austrian” economic theory makes no attempt to predict — when such an event will occur. If the current policy course is maintained then the breakdown could occur within 2-5 years (it almost certainly won’t happen within the next 2 years), but it could also be decades away. Importantly, there is still hope that policy-makers will wake up and change course before the masses wake up and trash the currency.

In conclusion, “Austrian” economic theory helps us understand the damage that is caused by monetary inflation and where the relentless implementation of inflation policy will eventually lead. That is, it helps us understand the direct and indirect effects of monetary-policy choices. It doesn’t, however, make specific predictions about whether the next few years will be characterised by inflation or deflation, because whether there is more inflation or a shift into deflation will depend on the future actions of governments and central banks. It will also depend on the performances of financial markets, because, for example, a large stock-market decline could prompt a sufficient increase in the demand for cash to temporarily offset the effects of a higher money supply on the purchasing power of money.

The upshot is that regardless of how the terms are defined, at this stage neither inflation nor deflation is inevitable.   http://tsi-blog.com/2015/07/does-austrian-economics-predict-inflation-or-deflation/

…Back to being a contrarian.  As a contrarian you don’t reflexively buy plunging prices, but you do look for ugly, distressed and cheap where there is a high level of fear and dislocation because you are more likely to find mis-pricings. –Prof. Greenwald.

Are coal stocks a buy?  They are likely to finish 2015 down a whopping 5 years in a row, along with another hated sector, gold stocks.  Both are down over 80% from their peak.

I’ve written a lot about reversion strategies on this blog (Meb Farber) and my books.   It is always hard to try and decide when an investment has declined and is a true value, or when it has simply declined with more to go?  There are lots of famous investing quotes to use here that may or may not be funny depending on your current holdings.

“Buy when there is blood in the streets”

“Investing is the only business that when things go on sale, everyone runs out of the store”

Ironically, the only industry to ever print 6 down years in a row? 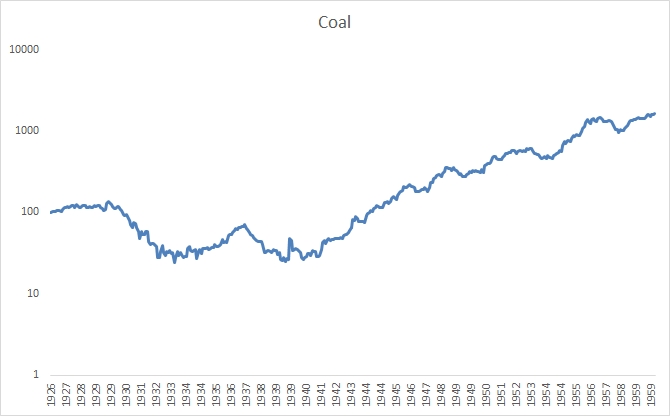 The next post will describe investing in cyclical stocks.

This entry was posted in Investor Psychology, Risk Management, Special Situations, YOU and tagged Coal Stocks. Bookmark the permalink.

5 responses to “Contrarian Dream or Nightmare?”