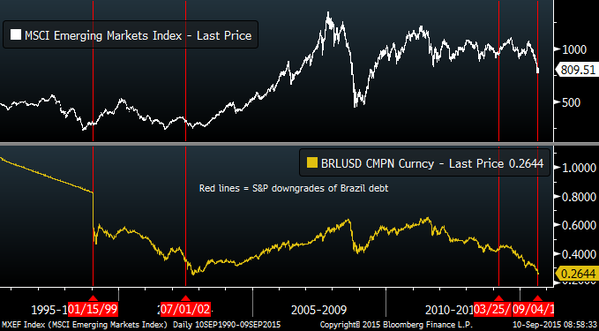 No Mas, No Mas! The Vale Chronicles (Continued)!

Some of my Brazilian readers seem to be upset that I used “No Mas”, Spanish words, rather than Portuguese ones, in the title. To be honest I was not thinking about language, but instead about a boxing match from decades ago, where Roberto Duran used these words to give up in his bout with Sugar Ray Leonard.

I have used Vale as an illustrative example in my applied corporate finance book, and as a global mining company, with Brazilian roots, it allows me to talk about how financial decisions (on where to invest, how much to borrow and how dividend payout) are affected by the ups and downs of the commodity business and the government’s presence as the governance table. In November 2014, I used it as one of two companies (Lukoil was the other one) that were trapped in a risk trifecta, with commodity, currency and country risk all spiraling out of control. In that post, I made a judgment that Vale looked significantly under valued and followed through on that judgment by buying its shares at $8.53/share. I revisited the company in April 2015, with the stock down to $6.15, revalued it, and concluded that while the value had dropped, it looked under valued at its prevailing price. The months since that post have not been good ones for the investment, either, and with the stock down to about $5.05, I think it is time to reassess the company again.

John Chew: At least the author has a process to reassess his investment.  I believe the critical flaw in his analysis (easy to say in hindsight) was not noting the massive mal-investment due to distorted credit markets caused by central bank policies. To normalize iron ore prices you would need pre-distortion prices going back twenty-five years.