This makes an interesting psychological study.  Who holds the stock and how they react.   ($CMG last at $278, down 14.5%)  Many conversations below show no interest in discussing the valuation of CMG, but just the price (and if the price is declining, the pitiful management).

Also, note the focus on P/E ratio for valuation.   What about the flaws in using P/Es as a valuation metric?   No discussion about the business, cash flows or discount rate.

CMG will probably trade north of 6 million shares today or about 20% of the 28.5 million outstanding shares.  Where are the long-term shareholders?  One in five investors will sell based on one quarterly report.

If you have done your homework on valuation, then unreflective sellers who are throwing in the towel may mean an attractive price over the next few weeks.

I don’t know much about Chipotle, but management should be able to right the ship OVER TIME–the next 24 months–not next quarter. I don’t own any CMG currently.

Time to pile on (rats falling from the ceiling!):   https://www.bloomberg.com/news/articles/2017-10-25/ackman-s-lost-a-lot-of-queso-on-his-stake-in-chipotle

An interesting article on the struggle within the turnaround efforts.

“Every chain restaurant, he says, goes through this rite of passage. For every success like Starbucks, there are former high-flyers like Baja Fresh and Boston Market that no longer have cultural currency and are slowly fading.
Moran (Chipotle founder) remains confident that Chipotle will not end up an afterthought dotting the strip malls of America, but he preaches patience. “Will we climb out of it and get back to our former greatness? I absolutely believe we will,” he told me in June. “But will that take a year or two or three or four? I don’t know. The full recovery from this is going to take a long time.” https://www.fastcompany.com/3064068/chipotle-eats-itself

Does Momentum Work with Value Investing? 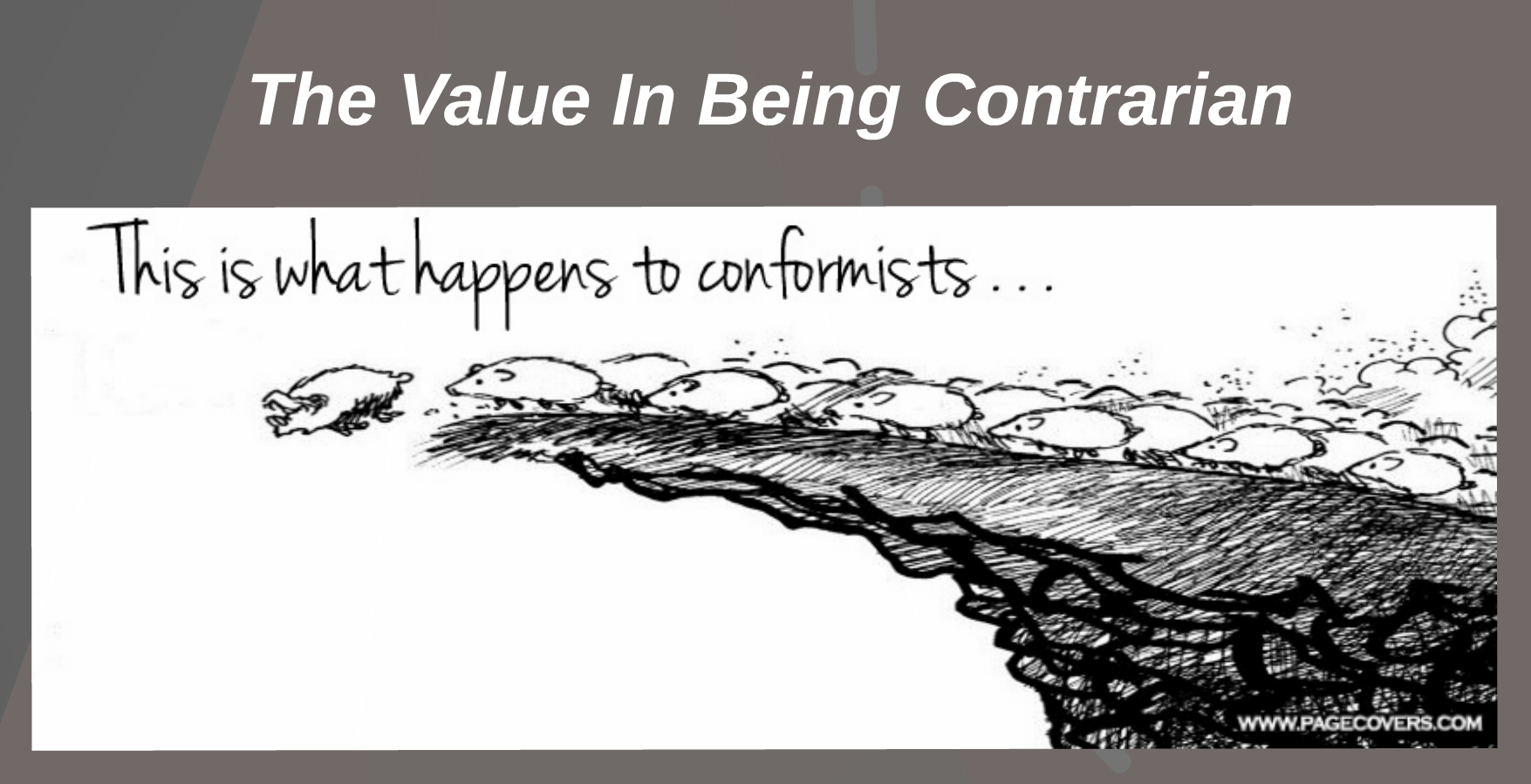 See the research paper by Nicholas Barberis below. Barberis concludes that value and momentum are driven by biases that mirror one another. Value is driven by an overreaction problem in which humans are too quick to draw conclusions from a small amount of recent data. In contrast, momentum is driven by an underreaction issue, which is the opposite of verreaction. With underreaction, humans are slow to update their views based on new evidence, which could be due to a systematic behavior bias and/or due to the fact human beings simply have limited cognitive power.

A lot to ponder.  I recommend Quantitative Investing by Wesley Gray. Momentum investing is NOT growth investing (buying price at high multiples to underlying fundamentals), because momenum investing is strictly based on recent price movements not fundamentals.

a model of investor sentiment or under and over reaction

Can we control our emotions and emotional responses? 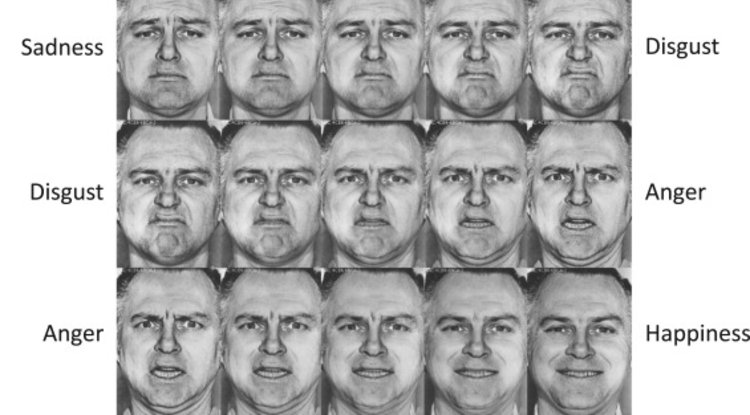 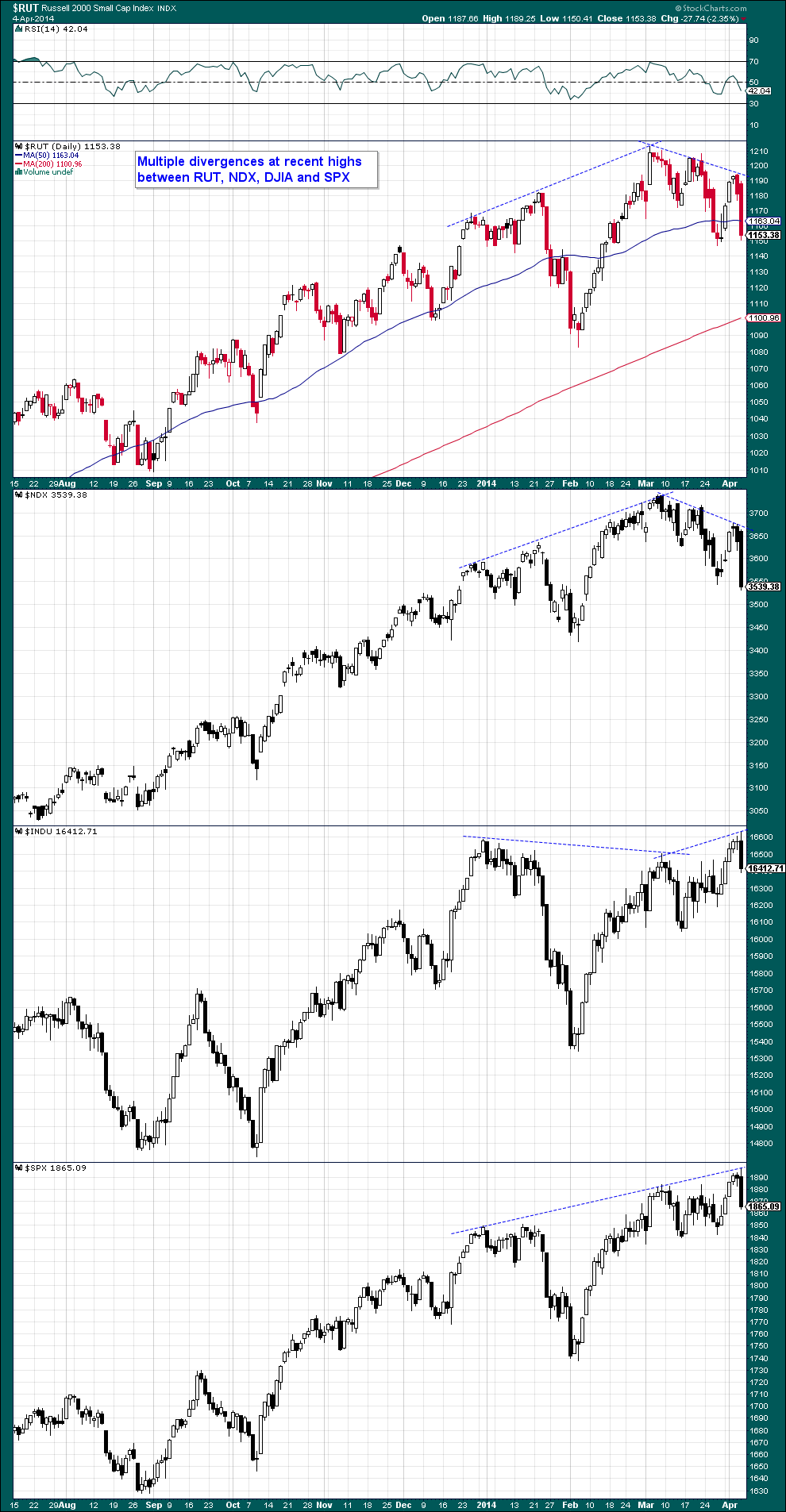 When momentum stocks crack, this is what it feels like: http://youtu.be/go9uekKOcKM

A reader asked if ABCT was helpful in timing purchases or sales.  I don’t believe so, but you see where the canaries are beginning to die in the coal mine. If artificially manipulated interest rates–through the Fed’s manipulating the value of the currency (The Fed monetizes the debt through “quantitative easing” which is just currency debasement/printing up fiat currency)–cause mal-investment, then you would expect to see the first cracks in the most over-valued areas of the market first.  Note the collapse of sub-prime in 2007 before the general equity collapse in 2008/09.

Here Ludvig Von Mises(1881 – 1973) explains, “The boom can last only as long as the credit expansion progresses AT AN EVER-ACCELERATED pace. The boom comes to an end as soon as additional quantities of fiduciary media are no longer thrown upon the loan market.”  Note that the Fed is “tapering” or buying fewer bonds with newly issued fiat currency.   For the boom to continue, the Fed would need to VASTLY INCREASE the monetary madness.

This fractional reserve banking system allows banks to engage in credit creation by issuing notes and bank balances unsupported by any new wealth. Or the Fed simply creates the money out of thin air to purchase Treasury Debt from other individuals and institutions.  Since money substitutes are created out of thin air, the whole process is a risky venture. On its face, such a practice would be fraudulent except that it has a legal basis whereby central banks give commercial banks the legal right to issue “counterfeit” money.

All the interference of free market prices by the Fed to lower interest rates just promotes business activity that would be uneconomic at normalized interest rates (read: a higher cost of capital). Can you be surprised when Tesla, Yelp or Pets.com (in 2000) are the first to plunge? 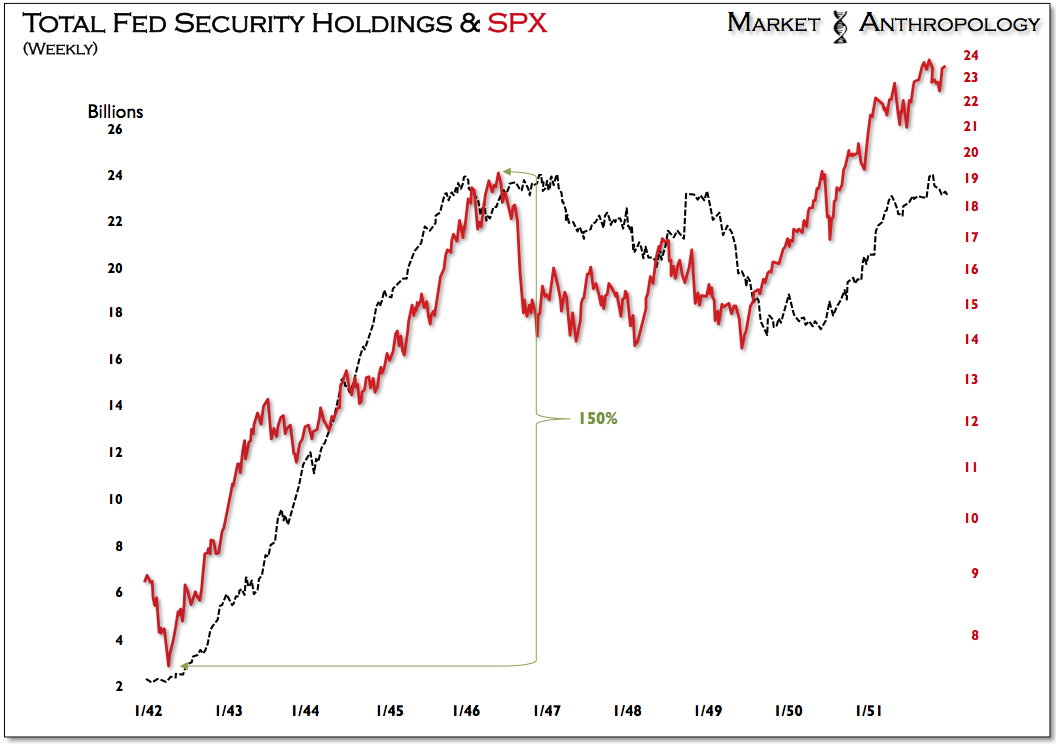 A great blog: http://www.marketanthropology.com/2014/04/a-staggered-start_7.html  In the chart above, note the last time in the 1940s when the Fed was monetizing the government’s debt to pay for WWII. 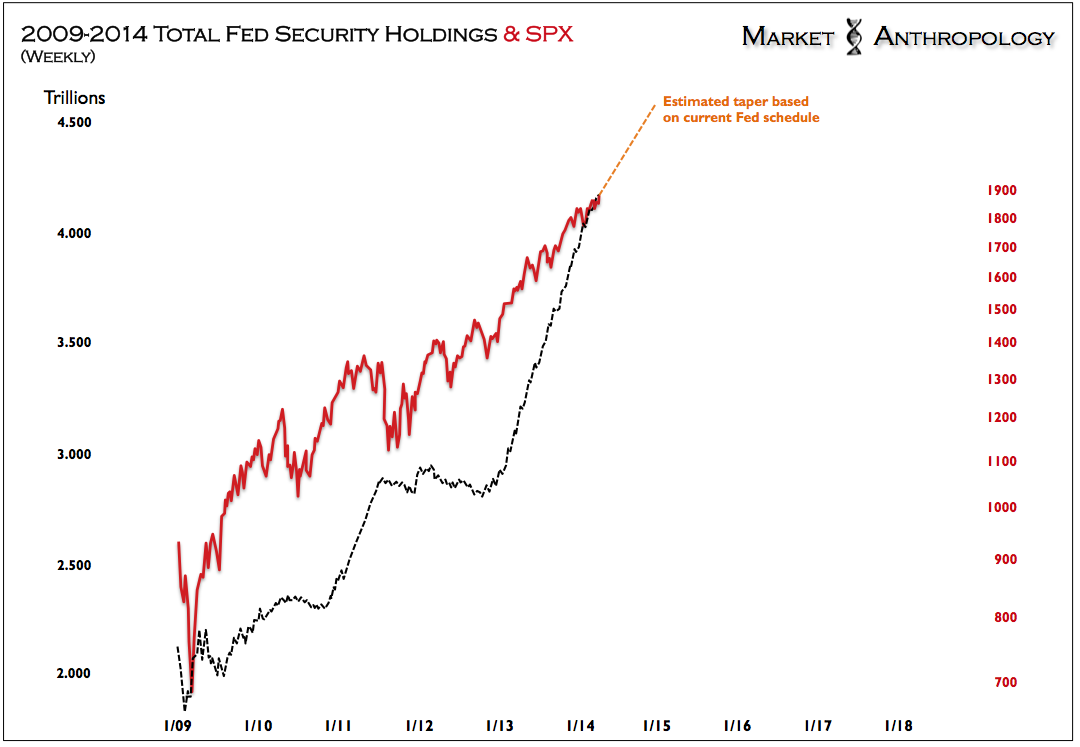 While perhaps investors and their money are moving here: 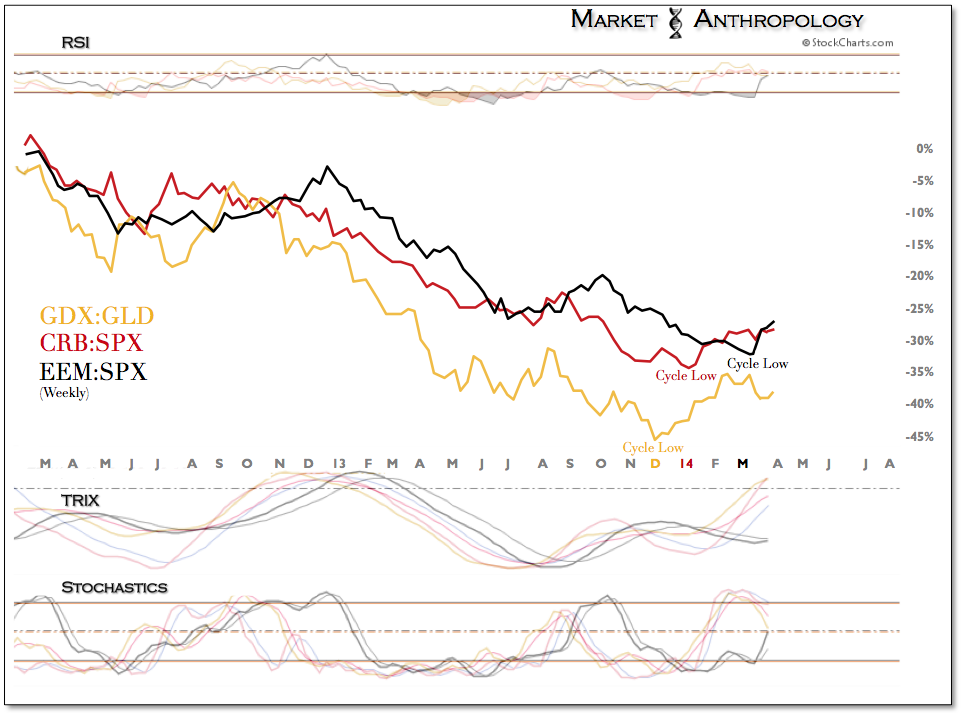 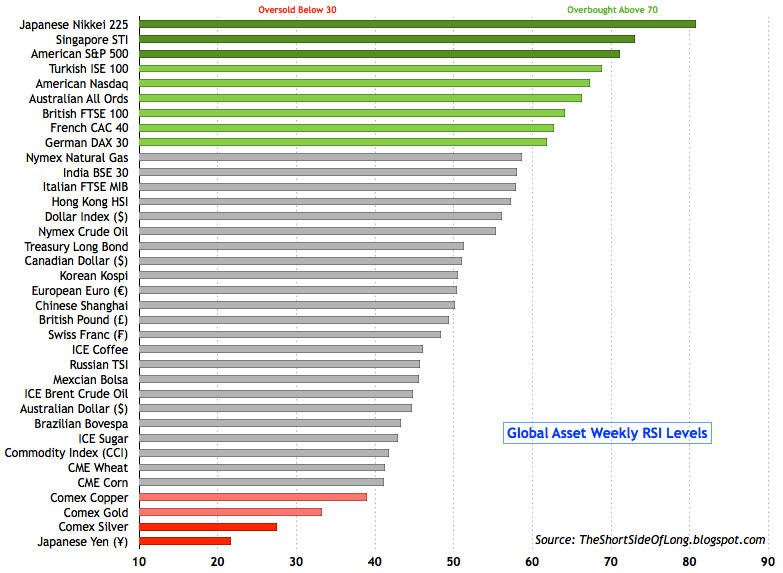