Why Do Value Investors Do Poorly?

Can You Explain This?

Starting on page 4, this money manager explains his firms consistent underperformance.   Do you agree or disagree? Why?  A lesson for investors.

There’s no such thing as “passive investing.” As Ben Graham defined it in his magnum opus, Security Analysis, “An investment operation is one which, upon thorough analysis, promises safety of principal and an adequate return. Operations not meeting these requirements are speculative.” Because passive strategies entail zero analysis of either of these qualifications they are, by definition, speculative. And those adopting them are speculators, not investors.

My point here is not to shame everyone who has embraced passive in recent years. There are plenty of good reasons to go passive, namely to dramatically lower your costs. My point is that if you want to call yourself an “investor” you need to do a little bit more thinking about the prices and fundamentals of risk assets than just buy at any price and hope. I think Jesse Livermore said it best in Reminiscences of a Stock Operator:

The average American is from Missouri everywhere and at all times except when he goes to the brokers’ offices and looks at the tape, whether it is stocks or commodities. The one game of all games that really requires study before making a play is the one he goes into without his usual highly intelligent preliminary and precautionary doubts. He will risk half his fortune in the stock market with less reflection than he devotes to the selection of a medium-priced automobile.

Embracing passive investing is exactly this sort of ‘cover your eyes and buy’ sort of attitude. Would you embrace the very same price-insensitive approach in buying a car? A house? Your groceries? Your clothes? Of course not. We are all very price-sensitive when it comes to these things. So why should investing be any different?

Posted in Investing Gurus, YOU

Lesson on Franchises in Cyclical Markets 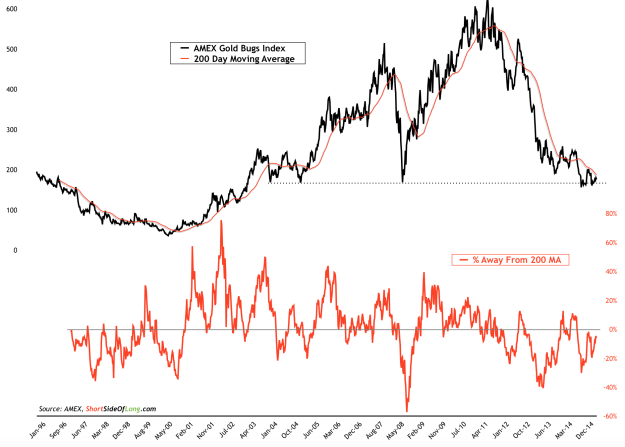 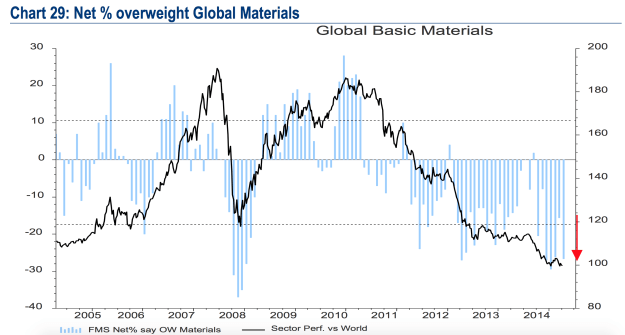 Markets can do ANYTHING in the short-term, so the following is not a prediction that miners will rise in price. However, what comes first–the price rising or the buying? 🙂 Miners chop around in a trading range as money managers flee the sector and now sit with record low allocations to this sector. * How good are money managers (on the whole) picking the right sector to invest in?  I leave it to you to find that out.

Wedgewood Partners: Franchises in Cyclical Market and a Lesson on Diversification

He points out diversification may mean the sources of profitability can be different among companies within a particular sector.  (Refer to Competition Demystified by Bruce Greenwald for a course on this distinction). Note the high revenue conversion to free cash flow (page-14) for those companies compared to other companies in the oil services sector.

Now move on to wedgewood partners first quarter 2015 client letter crude realities.  Note on page 13 how he looks at the oil services market–the structural attribute to focus on is drilling intensity.  Interesting…. Look at pages 18 and 19 for a further discussion on NOV and CLB.

To learn, you might download those company’s recent annual reports and try to figure out their revenue to free cash flow conversion.  Look at what the companies use for maintenance capex.  Note how Core Labs is a free cash flow gusher (Charlie Munger would smile on this).  Core Labs is a different business than SLB and NOV, but is grouped in the same industry/index.  When sellers of ETF sell, they don’t distinguish among companies and therein lies opportunity for us. Yeah!

I do the opposite of this:

Today’s chart of the day focuses on sentiment in the basic materials sector. Regular readers of the blog already know that I have been closely following Merrill Lynch’s Fund Manager Survey for years now. This months survey was conducted in a period between 2nd to 9th April 2015 with a total of 177 panellists, with $494 billion of assets under management. The survey should be used as a very good contrarian indicator.

According to the recent survey, global fund manager allocation towards global materials declined sharply in the month of April to net 27% underweight from net 16% underweight the previous month. As we can clearly see from todays chart of the day, sentiment is very depressed right now. Merrill Lynch states that the current allocation is 1.8 standard deviation below its long term average.

Furthermore, the overall commodity and natural resources theme is very much disliked by global money managers. Commodity allocation is unchanged for the third straight month and remains at net 20% underweight. That is 1.2 standard deviations below its long term average and even more interestingly, fund managers remain underweight commodities for the 28th month in the row. 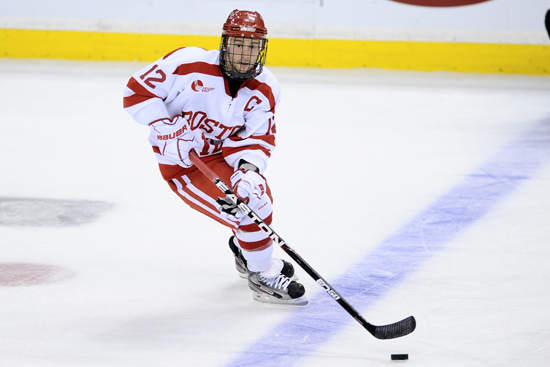 Investing through the prism of a “successful business owner” requires the right combination of temperament and behavior. Specifically, success requires, no, demands, the temperament to view booming stock prices as increasing risk and crushing stock price declines as increasing opportunity. Many professional and lay investors profess to possess a contrarian element to their investment behavior and attitude, but far fewer are able to repeatedly execute when the chips of extreme fear or greed are on the table.  Furthermore, successful stock market investing requires the preparation and execution of a marathoner, not a At Wedgewood we attempt to amplify this “business owner” edge through significantly higher conviction by means of a focused portfolio of just twenty stocks.   2q_letter 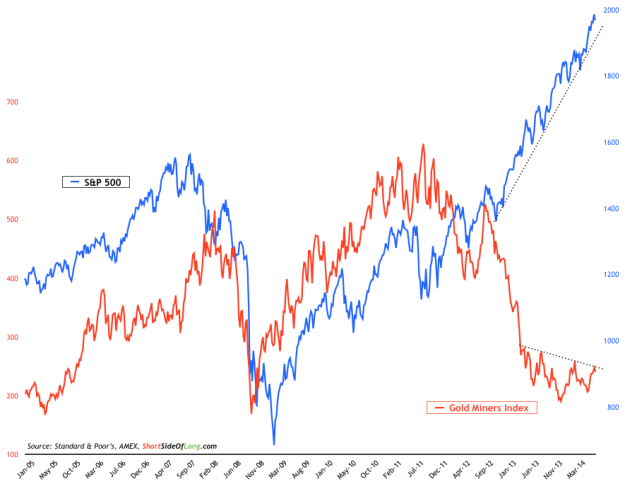 Upon return, I will post my Yamana valuation. There seems to be little interest in the miners–a great sign for contrarians.

Why gold? Perhaps this gentleman from the 1800s, John Witherspoon, knows what we will learn in the future–that fiat money is a failure.

A great read: An Essay on Money by Witherspoon

I will be back in two weeks. 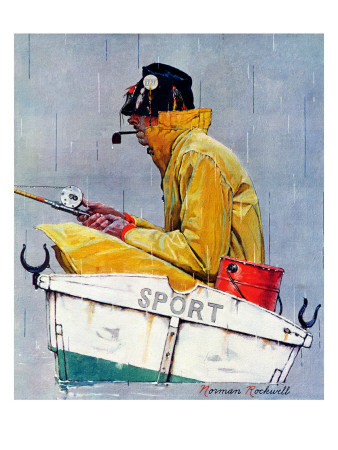 As David Ricardo, a successful speculator who, in his early retirement, became one of the finest economists of the early nineteenth century, explained in 1817:

It has been my endeavor carefully to distinguish between a low value of money and a high value of corn, or any other commodity with which money may be compared. These have been generally considered as meaning the same thing; but it is evident that when corn rises from five to ten shillings a bushel, it may be owing either to a fall in the value of money or to a rise in the value of corn…..

You can never read enough about a great business and the importance of HOLDING ON to reap the benefits of growth.  If you can combine patience with the knowledge of understanding the moat of a great business, then you will have an outstanding investment career.

Klarman’s Speech (Thanks to a reader)

His latest speech also includes a distinct tone of regret over where the current state of affairs is taking the U.S. He sounds positively saddened by how things are run in his country. In Klarman’s words:

“Like all of you, I am worried about our future, I am concerned about the prospect for upcoming generations to have the same opportunities that ours did, and I’m saddened that our generation was handed something unique, the stewardship of the greatest country in the history of the world– and we are far down the path of making it less great.”

Klarman said that the idea that financial markets are efficient is foolish, and he goes on to describe how that will always remain the case. Markets are governed by human emotions and they do not follow laws of physics—prices will unpredictably overshoot, therefore the academic concept of market efficiency is highly incorrect.

“Academics are deliberately blind to the fifty plus year track record of Warren Buffett as well as those of other accomplished investors, for if markets are efficient, how can Warren Buffett’s astonishing success possibly explained?”

In his speech Klarman mentioned value-investor Ben Graham’s explanation of markets, where he says that Mr. Market is to be perceived as an eccentric counter-party which should be taken advantage of, but one should not follow its emotional advice. He also agrees with Ben Graham’s idea that assets should be bought at a significant discount to keep your margin of safety.

“As when you build a bridge that can hold 30 trucks but only drive 10 trucks across it, you would never want your investment fortunes to be dependent upon everything going perfectly, every assumption proving accurate, every break going your way.”

Klarman said that the current economy is being built like a house of cards that will implode. Huge deficits, empty government promises, pretty pictures painted to ease voters and reliance on external markets to keep your currency afloat, have all disrupted the margin of safety in U.S. economy.

Klarman Encourages Going Against The Grain

He says that investors have become increasingly speculative and subject themselves to frenetic trading, even the holding period of 30-yr treasuries has fallen down to a mere couple of months. Investors increasingly rely on technology to judge their performance not merely on a monthly or quarterly basis—it has now become an hourly practice.

“The performance pressure drives investors to into an absurdly short-term orientation…. If your track record is going to be considered by investment committees every quarter, if you are going to lose clients and possibly your job because of poor short term performance, then the long term becomes almost completely irrelevant.”